The United States Federal Communications Commission on Thursday voted to expand emergency alerts from 90 to 360 characters on 4G and LTE networks, and to include support for links so people can follow up to get more information about an unfolding situation. As it stands, emergency alerts are short in length and often offer no resources for people to get in contact with emergency personnel if necessary. 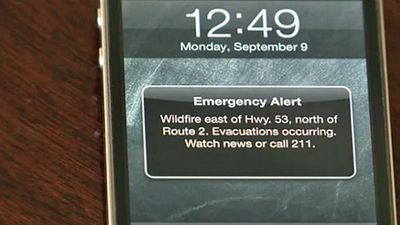 Image via NBC
Wireless providers like Verizon, AT&T, Sprint, and T-Mobile send these alerts and will be required to update their systems with support for the new features that have been mandated by the FCC.

"Vague directives in text about where to find more information about a suspect, just as we saw in New York, are not good enough," said Jessica Rosenworcel, an FCC commissioner. "As we move into the 5G future, we need to ensure that multimedia is available in all of our alert messages."

Carriers will also need to start supporting the transmission of Spanish language alerts and introduce a new type of safety alert designed to send "Emergency Governmental Information" like the locations of emergency shelters or an order to boil water before drinking.

The FCC's decision follows criticism of the emergency alert system after alerts were sent out in New York and New Jersey asking citizens to help track down a man suspected of setting off bombs in the area. The alert included a message advising people to "See media for pic," highlighting its shortcomings. It is not clear when the new rules will go into effect.

This entire thing is one of those ideas that sounds great until you think about it for more than a minute and a half. I turned it off the instant I got the first amber alert - which was for something happening 50 miles away from the business meeting that I was in the middle of (so I would have been of no help in any event).

You stopped too soon. You are right--you do have to think about it "for more than a minute and a half." ;) You don't understand the program. The Amber Alert program is not designed for you to run outside and get in your car and start looking for a suspect who took a child. It is to alert people who are already on the road or who might be out and about later and recognize a car's description, etc. You also complain that it was "50 miles away" from your business meeting. Realize that it is a judgment call, but when someone kidnaps a child they are likely to go mobile so law enforcement is not going to just send out an alert to the immediate neighborhood.

If you do leave the alerts on, and get the thankfully rare alert that interrupts your day, it might also help to remember the little girl,"Amber" behind the program and realize how successful the program has been in saving children. Amber Hagerman was a little 9-year-old girl who was abducted while riding her bicycle in Arlington, Texas, and was later found murdered. RIP. The Amber Alert program named in her honor has now led to finding 800 abducted children. Here's a link to those success stories that is updated regularly:

All that said, these programs need to continue to be refined and people should obviously continue to have the choice to mute or turn these off. Hopefully, the Emergency Broadcast alert program will continue to offer more customization as to types of alerts you want, weather, crime, etc., as well method, silent, vibrate, etc., and time of day, etc.
Score: 6 Votes (Like | Disagree)

Audi09
just turn the option of recive them off. i did
Score: 5 Votes (Like | Disagree)

Norbs12
Sadly, unless they let you customize the alerts, it's staying off on my phone. It's far too aggressive of an alert. I get it's supposed to be "very important" but I get important alerts just fine without any tones and I don't need a heart attack to get a message from the gubbament.
[doublepost=1475169921][/doublepost]

When I received the most pounding disturbing sound in the middle of the night by an Amber Alert that scared the heck out of me so bad my heart was pounding, I had to turn Amber Alert OFF for good! This is a good idea but it needs to be refined so people don't have a heart attack and have another alert! LOL!

Yeah it's pretty retarded, and the only settings are "WAKE UP NOW NUCLEAR ATTACK" loud or OFF. Oh well, off it is...
Score: 5 Votes (Like | Disagree)

krause734
As long as we can still be able to mute them, they're fine. I hated being woken up at 3AM for a missing person.
Score: 4 Votes (Like | Disagree)

The more I use the new iOS 10 Messages App the more I hate it.

What does that have to do with emergency alerts?
Score: 3 Votes (Like | Disagree)

Yeah it's pretty retarded, and the only settings are "WAKE UP NOW NUCLEAR ATTACK" loud or OFF. Oh well, off it is...

I wouldn't mind the loudness of the messages if they weren't mostly... Amber Alerts for someone 200 miles away. Like, okay, sure, there's a 0.1% chance that car might drive here - do you also alert every city they might fly to? Where does it stop? If someone was just kidnapped, you want everyone within, say, 25 miles to be on the lookout. If you get people used to receiving alerts that are rarely relevant to them, they'll get in the habit of ignoring them. That said, I haven't done anything to turn them off on my phone.

Reminds me of the official state-controlled roadside message signs, that were supposed to only be for warning about exceptional driving-related conditions, that now say things like "there's a drought, conserve water" - yes, that's good to know (as if it wasn't obvious), but did you, the folks in charge of road safety, really think that having me divert my attention from driving to read that message about water conservation was somehow making driving safer? (Yeah, it's the agencies involved getting bit by the "when you have a hammer, everything looks like a nail" bug - thinking it'd be a shame if their new toy wasn't getting used - when it'd be better if showed nothing, or perhaps something very quick to parse, like a big check mark, if there wasn't an exceptional driving-related condition to report, so people would know that reading it really was important if/when some message was displayed.)

On a related note, I have an app on my phone (QuakeFeed ('https://appsto.re/us/sXDby.i')) set up to alert on any earthquakes nearby, or large ones anywhere in the world. Partly because I live in California, but also just because it's interesting - it makes a non-intrusive but distinct alert noise that works quite well. I tend to know about major quakes a bit before the major news sources report them.
Score: 3 Votes (Like | Disagree)
Read All Comments

Monday November 28, 2022 10:42 am PST by Juli Clover
Apple has cut back on its Twitter advertising, according to Twitter CEO Elon Musk. In a tweet, Musk said that Apple has "mostly stopped" its Twitter ads, asking if Apple hates "free speech." Musk went on to publish a poll asking if Apple should "publish all censorship actions" taken that impact customers and he began retweeting content from companies that Apple has had moderation discussions ...
Read Full Article • 1442 comments