Plex today announced the debut of a new Plex Cloud service, which is designed to allow Plex users to store their media in the cloud so it's accessible anywhere without the need to set up a local server.

Amazon Drive allows users to create an always-on Plex Media Server that can stream any media content to any device with Plex installed in 60 seconds or less. As with a local server, media is organized through the Plex app for quick access to TV shows, movies, music, pictures, and more. 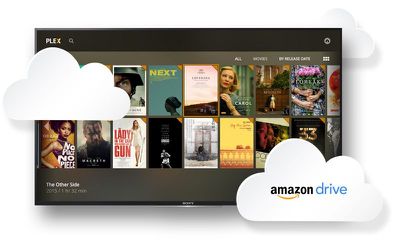 To use Plex Cloud, Plex customers will need to subscribe to Amazon Drive, Amazon's unlimited cloud storage offering. Amazon Drive is priced at $60 per year and will allow Plex users to store as many files as they would like with no size limits.


At the current time, the Plex Cloud service is available to Plex Pass customers who sign up to beta test the feature. It is an invite-only beta test and will be limited to a select number of Plex Pass users.
Tag: Plex
51 comments

Crazy Badger
Be interesting to see how Amazon react when people start putting TB's of pirated media into their Cloud services, and then using Plex to share them with family and friends ;)
Score: 11 Votes (Like | Disagree)

grad
Ripping your bought DVDs for convenience is a serious crime against humanity. When I hear people doing it, instead of buying multiple DVDs of the same movie again and again for every compatible device/place AND subscribing to a streaming service that includes the same movies on top of it so that they can access the content from their post-pc gadgets, I imagine the poor lawyers and Hollywood companies' GMs starving to death while their children are left uneducated selling matches in the street.

On the other hand, putting your personal videos on the cloud is both advisable and patriotic.
Score: 6 Votes (Like | Disagree)

requires you to rip DVDs

Actually spat my coffee out.
Score: 4 Votes (Like | Disagree)

Too expensive. I'll just set up a server at home and be done.

A dedicated server is pretty expensive too... not to mention many people's upload speeds are ~5 mbps which isn't really enough to reliably stream to devices outside your network. To me, this is a fantastic thing, with the very notable exception that you're putting media unencrypted up on the cloud.
Score: 4 Votes (Like | Disagree)

Too expensive. I'll just set up a server at home and be done.

and the server is free? and what about electricity?
Score: 3 Votes (Like | Disagree)

Thursday December 8, 2022 7:05 am PST by Joe Rossignol
iOS 16.2 is expected to be released next week following nearly two months of beta testing. With last-minute additions like Apple Music Sing and Advanced Data Protection, the software update now has over a dozen new features for the iPhone. Below, we've recapped many of the new features coming with iOS 16.2, including Apple's new whiteboard app Freeform, two new Lock Screen widgets, the...
Read Full Article • 70 comments