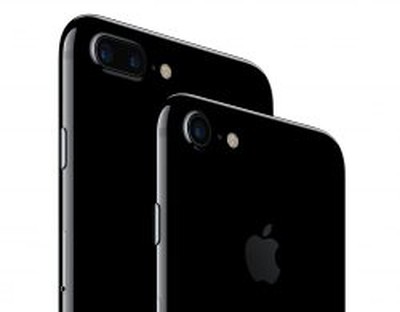 Apple's new Jet Black color is a popular choice among early iPhone 7 and iPhone 7 Plus adopters, but the new models face a global shortage as the new high-gloss finish has proven challenging for the company's manufacturers.

Jet Black models suffer from a low casing production yield rate of 60-70%, meaning that 30-40% of units do not pass Apple's quality standards and must be retooled, according to KGI Securities analyst Ming-Chi Kuo.

When pre-orders began on September 9, shipping estimates for Jet Black models quickly slipped to November, but some iPhone 7 Plus models in the new color are now shipping sooner than expected. In-store availability of Jet Black models remains scarce, with only a few Apple Stores in France carrying the Jet Black iPhone 7 as of the time this article was published, according to iStockNow.

Early shortage not entirely due to market demand. Shipment time for online orders is on par with last year’s cycle, generally estimated within 2-3 weeks, with the exception of the jet black model, which suffers from a low casing production yield rate of 60-70%. However, with the number of countries in the first wave to debut the iPhone 7 rising to 28 this year, versus 12 for the iPhone 6S launch, we believe overall demand for iPhone 7 is lower than that of its predecessor. Regarding news of some mobile operators reporting pre-order growth for the iPhone 7 over last year’s 6S, we believe this is mainly attributable to market share gains for these mobile operators thanks to new promotions, rather than representing greater consumer demand.

Beeplance
Ten bucks betting that they will scrap this color option next year, with just the matte black option left.
Score: 26 Votes (Like | Disagree)

ChrisCW11
Apparently it scratches when you breath on it so yet again another naive set of problems created by Apple, a product too hard to manufacture and too easy get full of smudges and scratches and most people will put a case over it anyways so in the long run it is completely meaningless what color your phone is.
Score: 25 Votes (Like | Disagree)

barkomatic
I don't understand why it's so complicated to apply a shiny finish to metal. Car manufacturers have been doing it for years.
Score: 15 Votes (Like | Disagree)

I don't understand why it's so complicated to apply a shiny finish to metal. Car manufacturers have been doing it for years.

840quadra
Makes me wonder if matte black iPhones (like the one I have and love) are actually rejected gloss black cases, that were media blasted :eek:.

Though, I totally doubt that is true.
Score: 8 Votes (Like | Disagree)
Read All Comments

Monday May 10, 2021 10:41 am PDT by Juli Clover
Apple's upcoming iPhone 13 models will be slightly thicker than the iPhone 12 models and will also feature larger, thicker camera bumps with lenses that protrude less, according to iPhone 13 schematics seen by MacRumors. The new iPhone 13 and 13 Pro models are expected to feature a thickness of 7.57mm, up from 7.4mm in the iPhone 12 models. That's an increase of 0.17mm, which won't be hugely ...
Read Full Article • 142 comments