One of the simpler updates arriving in macOS Sierra is an overhauled experience for both Photos and Messages, bringing each app closer to their newly-updated iOS 10 counterparts. For Messages, that means users will now be able to use the Mac version of the app to send and receive rich links and Tapback messages, along with larger emoji characters when three or fewer are sent in a message.

Otherwise, Messages for Mac doesn't have the other additions introduced in iOS 10, including Digital Touch messages and the Messages App Store with sticker functionality. Users will still have to open their iPhones to send these types of messages, although macOS Sierra will better accommodate the visual placement of stickers and Tapback notifications than previous versions of Apple's desktop software. 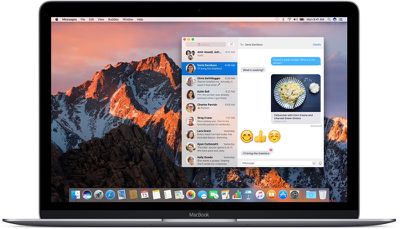 On the Photos side of things, the Mac version of the app will now have the "Memories" tab that was introduced in iOS 10. The feature intelligently curates photo collections based on location, date, and even the people within each image, and puts them all into new short videos for you to view. Although the feature is streamlined, users can choose to customize each Memory to their liking, similar to the Memories editing process in iOS 10.

Some of the memory categories Photos surfaces includes Recent events, Last Week, Last Weekend, Year summary, Trips, Birthdays, and more. Users who have already set up their People album in iOS 10 will have to re-scan their image library in Sierra since facial recognition settings don't carry over between devices. There will also be an new "Places" album to see the location of every image you've taken on a world map.

Other tidbit updates in Photos include a new "Brilliance" tool to improve photo detail through adding contrast and highlights, and Live Photo editing with filters and various other adjustment instruments. Third-party developers are also now able to use a Live Photo Editing API to create tools for editing Live Photos in Sierra.

macOS Sierra is available as a free download on the Mac App Store starting today. Check out the MacRumors Sierra roundup for more information on the new operating system, and keep a lookout for the rest of our macOS coverage.

gsmornot
The People album is a mess right now. Until it will sync to my other devices I'm not touching it. It is an awful lot of work to go through all the faces in a large library and group/name the people. To think about doing it for multiple devices with no guarantee long term it will sync or be reset. Yea, no thanks.
Score: 6 Votes (Like | Disagree)

btrach144
Apple really screwed up by not having face sync across Macs and iOS devices not ready.
Score: 3 Votes (Like | Disagree)

The People album is a mess right now. Until it will sync to my other devices I'm not touching it. It is an awful lot of work to go through all the faces in a large library and group/name the people. To think about doing it for multiple devices with no guarantee long term it will sync or be reset. Yea, no thanks.

I completely agree. I understand that Apple thinks that some people might think that the cloud storing "faces" is a security issue, but it is silly to use that idea to keep the rest of us that want that type of feature from being able to do it.

It is highly frustrating that Apple has no system-wide "faces" feature that will sync faces across multiple devices. Makes it useless to spend hundreds of hours organizing the faces in my 40k photos if those faces won't sync to my other devices, and (worse) those faces are gone if I do a clean install. Just silly.
Score: 2 Votes (Like | Disagree)

cameronjpu
The Mac version of Photos needs to have a way to restrict certain folders from showing up on mobile devices and also from showing up on the cloud. iCloud photo library cannot be an all or nothing proposition if they want it to succeed.

The phone version of Photos needs to have a way to apply a hard limit on the amount of space that the photo library can take up on the phone and adjust compression accordingly.
Score: 1 Votes (Like | Disagree)

But those Memories won't have these cool videos from iOS... Why?

The People album is a mess right now. Until it will sync to my other devices I'm not touching it. It is an awful lot of work to go through all the faces in a large library and group/name the people. To think about doing it for multiple devices with no guarantee long term it will sync or be reset. Yea, no thanks.

Weaselboy
Something not mentioned in the article, but once you install Sierra it starts a process called "photoanalysisd" that scans all your Photos images to recognize faces, dogs, whatever in your photos. You can see the process in Activity Monitor chewing up quite a few CPU cycles.

If you start Photos before this index is done and try to look at the "People" group, it will show a window like this that the scan is still underway. So you want to quit Photos and leave your Mac awake until this scan completes.

This screenshot was taken about an hour or so after the Sierra install, so it looks like the full index will take several hours.

Monday August 8, 2022 10:43 am PDT by Juli Clover
With the fifth beta of iOS 16, Apple has updated the battery icon on iPhones with Face ID to display the specific battery percentage rather than just a visual representation of battery level. The new battery indicator is available on iPhone 12 and iPhone 13 models, with the exception of the 5.4-inch iPhone 12/13 mini. It is also available on the iPhone X and the iPhone XS. Battery percent...
Read Full Article • 307 comments