A federal jury in Tyler, Texas has ordered Apple to pay $22.1 million to patent firm Acacia Research for violating U.S. Patent No. 8,055,820, related to cellular network technologies, according to court documents filed electronically this week. The monetary award is a running royalty for Apple's infringement through March 2016. 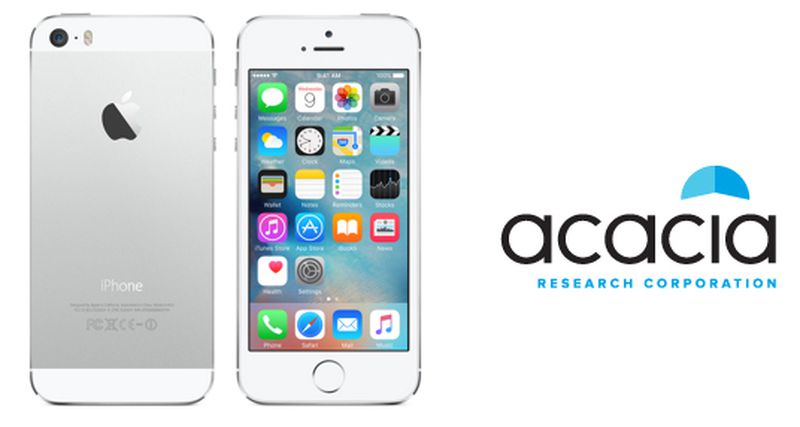 The jury said Apple did not prove with clear and convincing evidence that any asserted claims of the patent are invalid as obvious or based on improper inventorship. Apple's infringement was found to be willful, which in patent litigation means the patent holder can request that the judge enhance the damages by up to three times, or up to roughly $66.4 million in this particular lawsuit.

The lawsuit, filed in January 2014, accused Apple of selling multiple products that infringe upon the patent, including the iPhone 5, iPhone 5c, iPhone 5s, iPad 3, iPad 4, iPad Air, iPad mini, and iPad mini 2. U.S. Patent No. 8,055,820, titled "apparatus, system, and method for designating a buffer status reporting format based on detected pre-selected buffer conditions," is highly technical and at one point was assigned to Nokia.

AT&T, Verizon, Sprint, T-Mobile, and Boost Mobile were also named as defendants for selling the infringing iPhones, but none of the carriers were named in the jury verdict. U.S. Magistrate Judge K. Nicole Mitchell presided over the case in the U.S. District Court for Eastern Texas, a popular region for non-practicing entities like Acacia Research and VirnetX to bring patent litigation against companies like Apple.

Acacia Research, based in Newport Beach, California, says it has returned over $705 million to patent owners. The corporation creates a subsidiary company for each set of patents it enforces through litigation, including Cellular Communications Equipment, LLC in this particular Apple lawsuit.

Our partnership with patent owners is the cornerstone of our corporate strategy. Acacia is an intermediary in the patent marketplace unlocking financial value in patented inventions.

Apple has not confirmed if it will appeal the decision.

Apple generally engages in litigation over the unlawful use of Apple trademarks and copyrights such as product names, like iPod or iPhone. Apple is also a large company that, as a matter of business, does not "go after" smaller companies for the sake of monetary raiding.

Apple is no angel when it comes to IP.

Apple has gone after both small and large companies, for both trademarks and money.

Many people remember them going after a small coffee shop called "Apple Child" in Germany, and many of us remember them actually going after a New York City recycling initiative. Yes, NYC, the original "Big Apple", called that decades before Apple Inc ever existed.

Worst of all, Apple helped create one of the world's worst patent troll entities ever (Rockstar). They did this after spending billions to buy older Nortel patents. Rockstar only employed a dozen engineers dedicated to reverse engineering other companies' software to look for infringements they could sue over. Apple's part in this gives troll bashers zero moral ground to stand on.

Finally, the primary reason we see Apple get sued by patent holders so much, is because their policy is to ignore license requests until they are sued. So if you realized that Apple was using something YOU invented, you would have little choice but to sell your patent to a patent holding company large enough to try to fight Apple, because otherwise Apple would ignore you and use your IP without payment.

Technically no.
Unlike patent holding companies, these guys don't actually own the patents.
They are intermediaries for the patent owners.
They get a cut of any settlement/judgement.

No, they are patent trolls. Patent holding companies and patent assertion companies are considered patent trolls; not all, but most of them are. Acacia, by some accounts, is considered the #8 most dangerous patent troll. Their penchant for forming multiple LLC's for suing companies is pretty trolly. Licensing their patents isn't even a safeguard against being sued by one of their "subsidiaries". Both Apple and Microsoft have licensed patents from Acacia only to be sued later.

Was the patent holder doing anything with their invention? Was it a patent that Apple staff found in the US Patent Office? Did Apple staff read about the invention in some sort of journal? What was the publication? Did the inventor offer to sell it to Apple, with Apple declining and reverse engineering it?

What made the infringement willful?

I don't see answers to any of those questions. Doing a google search, all I could find was the same information on multiple sites. They read like a press release from this Acacia Research company ('http://acaciaresearch.com/wp-content/uploads/2016/09/091516-Apple-CCE.pdf').

Afaik the original patent holder of 820 was Nokia, so the patent is valid. All your other questions are moot since Apple was already familiar with Acacia's patent portfolio as Apple had already been a licensee of some of their patents. IANAL, but willful infringement implies knowledge of the patent in question and unlicensed use regardless of that knowledge. If it helps you any, Acacia asserted 5 patents and only 820 passed the sniff test.

DAMN Trolls! It is time we get proper legislation to stop patient abuse!

Or Apple could license things properly and not steal things that dont belong to them. You think they didn't know about this patten? Just sayin.
Score: 3 Votes (Like | Disagree)

CrystalQuest76
Was the patent holder doing anything with their invention? Was it a patent that Apple staff found in the US Patent Office? Did Apple staff read about the invention in some sort of journal? What was the publication? Did the inventor offer to sell it to Apple, with Apple declining and reverse engineering it?

What made the infringement willful?

I don't see answers to any of those questions. Doing a google search, all I could find was the same information on multiple sites. They read like a press release from this Acacia Research company ('http://acaciaresearch.com/wp-content/uploads/2016/09/091516-Apple-CCE.pdf').
Score: 3 Votes (Like | Disagree)
Read All Comments

Wednesday April 1, 2020 2:45 pm PDT by Juli Clover
Apple in March updated both the MacBook Air and the iPad Pro, and with the iPad Pro increasingly positioned as a computer replacement, we thought we'd compare both new machines to see how they measure up and which one might be a better buy depending on user needs. Subscribe to the MacRumors YouTube channel for more videos. We're comparing the base model 12.9-inch iPad Pro and the base model...
Read Full Article • 59 comments