Many customers who pre-ordered the Apple Watch Series 2 from Best Buy will not be receiving their new devices on launch day, according to emails the company sent out this evening.

During pre-orders that took place on Friday, September 9, Best Buy listed a Friday, September 16 delivery date, leading customers to believe they would receive their devices on launch day. Instead, Best Buy won't be shipping out orders until 9/28, nearly two weeks later. 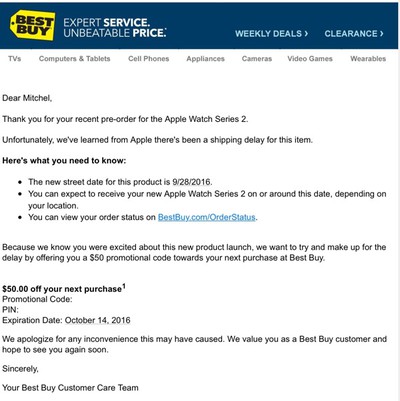 To compensate pre-order customers who are facing delays, Best Buy has included a promo code for a $50 discount on a future Best Buy purchase in each email, which must be used by October 14, 2016. That will get pre-order customers an extra Sport Band or another Apple Watch accessory.

Apple Watch Series 2 supplies were constrained from the moment Apple's pre-orders started, with shipping estimates on many models slipping within a matter of minutes, so it is no surprise Best Buy has been forced to delay its own shipments. Most Apple Watch Series 2 models placed today won't ship from Apple for 3 to 5 weeks, and Best Buy now lists all Series 2 watches as "Coming Soon."

Well BestBuy just earned by business going forward. They know how to take care of their customers. Take note Apple!

I think Best Buy could have instead offered $50 off the watch or a $50 refund. All this does (the $50 coupon code for a future visit) is ensure more spending at their store, likely more than $50 worth.
Score: 13 Votes (Like | Disagree)

HailstormX
50 bucks for missing the delivery date is a generous offer. I ordered from apple at midnight but got a 26th - 28th as a estimate. When I saw best buy had the delivery date of the 16th I canceled and ordered thru best buy. Its a bummer that couldn't do the 16th. Still a good move on best buy part.

Apple clearly wasn't ready for a 16th launch. More like the end of the month. They didn't have enough supply to handle 10 mins of orders.
Score: 8 Votes (Like | Disagree)

YaY... $50 should get me a free Monster cable at BestBuy

and free nothing at apple.
Score: 6 Votes (Like | Disagree)
Read All Comments