Ahead of the public launch of iOS 10 coming tomorrow, Apple today made the Messages App Store live, aggregating all of the apps, games, and sticker packs that can be used in the Messages app and making them available for download.

The Messages App Store looks almost identical to the iOS App Store, so the interface will be immediately familiar to iOS 10 users. There are featured apps and stickers displayed at the top of the store, along with editorial picks like "10 iMessage Apps We Love" and "Games in Messages? Sweet!" 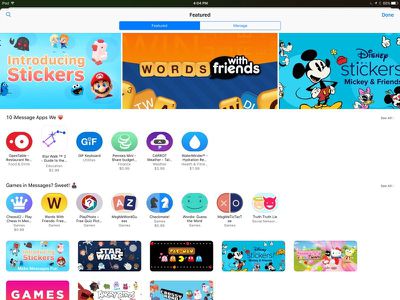 The Messages App Store is a little bit sparse right now because apps are still being released, but when iOS 10 becomes available tomorrow, there will be dozens if not hundreds of apps and sticker packs ready to download.

I know I'm not speaking for everyone, but who on earth actually uses iMessage anymore?

Almost everybody! In my experience.
Score: 75 Votes (Like | Disagree)

I know I'm not speaking for everyone, but who on earth actually uses iMessage anymore? I've used it a lot in the beginning, but these days everyone uses other messaging solutions such as WhatsApp or Telegram. I think this 'stickers' thing (including its own App Store) is a bit overreactive for something that - at least that's what I think - is not being widely used... :p

I know I'm not speaking for everyone, but who on earth actually uses iMessage anymore? I've used it a lot in the beginning, but these days everyone uses other messaging solutions such as WhatsApp or Telegram. I think this 'stickers' thing (including its own App Store) is a bit overreactive for something that - at least that's what I think - is not being widely used... :p

I use Messages all the time. Most of my friends do as well.
Score: 37 Votes (Like | Disagree)

iapplelove
I have to admit, never thought there would ever be a message App Store.
Score: 20 Votes (Like | Disagree)

jdillings
Stickers will be the new watch bands
Score: 18 Votes (Like | Disagree)

Almost everybody! In my experience.

Yep, Apple's Messages app is my primary form of not-in-person communication with a lot of people. It handles groups, typing indicators, and read receipts well, it's encrypted, and falls back gracefully to text messages for those who don't have iOS. And it works seamlessly across my phone, watch, iPad, and tablet, even using the phone to proxy text messages through to my laptop. It makes me quite happy. What's not to like?
Score: 15 Votes (Like | Disagree)
Read All Comments