Apple today announced the second generation Apple Watch, which it's calling "Series 2," confirming a handful of previously rumored features on the wearable device. Series 2 is swimproof and water resistant up to 50 meters, so users can "wear their watch with confidence in the water." The company also confirmed that Series 2 has built-in GPS so users can get more accurate pace and distance readouts during running workouts.

Apple's announcement was focused on the fitness features of Apple Watch Series 2, particularly attempting to craft intelligent and user-friendly swimming workouts on the wearable device. The new algorithims it has developed are for pool and open water swimming sessions, with Series 2 able to "count laps, track average lap pace and auto-detect stroke type to accurately measure active calorie burn." 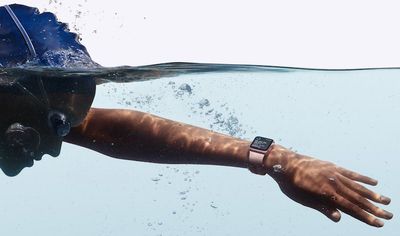 “We’re thrilled with the response to Apple Watch and how it’s changed people’s lives. We are committed to fitness and health and think our customers will love the new capabilities of Apple Watch Series 2,” said Jeff Williams, Apple’s chief operating officer. “With a powerful new dual-core processor, water resistance 50 meters and built-in GPS, Apple Watch Series 2 is packed with features to help our customers live a healthy life.”

Thanks to the built-in GPS, Apple Watch Series 2 can record precise distance, pace, and speed readouts during outdoor runs and bike rides, all without needing to take an iPhone along during the workout. The connected iPhone Activity app will allow users to delve into even more detailed information about their workout session after they're finished.

With a dual-core processor and all-new second-generation S2 chip, Apple Watch Series 2 is up to 50 percent faster than the first generation. A new GPU also improves the device's overall graphics performance, allowing for a display that's 2x brighter (ranked at 1,000 nits) than the first Apple Watch, so it's easier to read in bright sunlight.


In addition to aluminum and stainless steel models, the company is introducing a new ceramic Apple Watch Edition in Series 2, which has a pearl-like, smooth white color. Apple briefly touched upon a new set of Hermès bands, as well, including versions of Single Tour, Double Tour, Cuff, and Double Buckle Cuff.

As a side note, the company is also now calling generation one "Series 1," and will have models starting at $269, with a processor upgrade to put it on the level of Series 2. The same order and launch dates of September 9 and September 16 apply for Series 1.

I'll feel sorry for people who buy the second gen AW when the 3rd gen comes out as it will be what the second gen should've been.
Score: 19 Votes (Like | Disagree)

avanpelt
The Nike Plus thing is bizarre. So if I want those things, I need to buy the Nike version of the watch? Strange that they didn't just make it an app.
Score: 12 Votes (Like | Disagree)

jmgregory1
Ceramic Watch is foretelling of the next iPhone. The rumors of glass are likely close, but it will be a version of ceramic - my guess.
Score: 11 Votes (Like | Disagree)

The Apple Watch has an Amoled display
Score: 11 Votes (Like | Disagree)

Don't feel sorry for me - I've loved this watch since launch day and I've gotten to use it for the last 18 months or so. It already has a new home waiting for it, so I'm not feeling too sad about upgrading.
Score: 10 Votes (Like | Disagree)
Read All Comments