iPhone 6s Named World's Most Popular Smartphone Ahead of iPhone 7 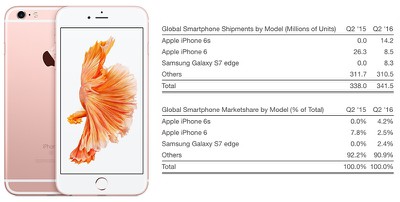 Strategy Analytics added that the iPhone 6s is "currently the world's most popular smartphone," implying that it has remained the top-selling smartphone through the third quarter leading up to the launch of the iPhone 7 and iPhone 7 Plus.

Both the iPhone 6s and two-year-old iPhone 6 outsold Samsung's newer Galaxy S7 edge, released in March 2016, which finished third with an estimated 8.3 million shipments in the second quarter.

Apple officially reported sales of 40.4 million iPhones during the second quarter, including the iPhone 6s Plus and older models.

iPhone 7 models could remain the top-selling smartphones worldwide through the holiday shopping season after Samsung's voluntary Galaxy Note7 recall due to isolated incidents of exploding batteries. Some analysts forecast the "heartbreaking" recall could cost Samsung between $1 billion and $5 billion in revenue.

Someone256
This phone is a complete beast, I won't replace my 6s for at least 3 years.

After coming from android (Galaxy s6) 6 months ago to the i6s I feel like the iPhone is in its own league and android is just a cheap Chinese copy, that's how it feels to me.
Score: 21 Votes (Like | Disagree)

keysofanxiety
Most impressive iPhone since the 4, in my opinion. Stonkingly good hardware. Touch ID is instantaneous. I personally don't mind the design, protruding camera and all.
Score: 14 Votes (Like | Disagree)

Porco
I'm still really happy that Apple put nearly everything I care about from the 6S into the SE, which for me has a superior form factor (both in size and shape, IMHO). I agree with those who say the 4/4S was their favourite ever though.
Score: 9 Votes (Like | Disagree)

newyorksole
Whether this info is totally accurate or not, I love my 6S Plus and I'm sure everyone will be clamoring for the next one too.
Score: 6 Votes (Like | Disagree)

It's no surprise they are the most popular phones around. Not to mention their brand cachet.

They are excellent devices in their own right. And for those who like to keep it simple, they are outstanding devices (as all Apple products are in their "limited" niche).

Say anything you will about Apple, but I will say this:

Apple devices may not do everything others can, but what they do set out to do, they (arguably) do it better than anyone.
Score: 6 Votes (Like | Disagree)

otternonsense
And the 7 will make it even more popular, especially with those who don't want to part with the headphone jack just yet.
Score: 5 Votes (Like | Disagree)
Read All Comments