Satechi today announced an expansion of its Type-C accessory line, introducing the new Slim 4K Multi-Port USB-C Adapter. The Slim Multi-Port Adapter is designed to add multiple extra port connections to a laptop or desktop along with 4K support. 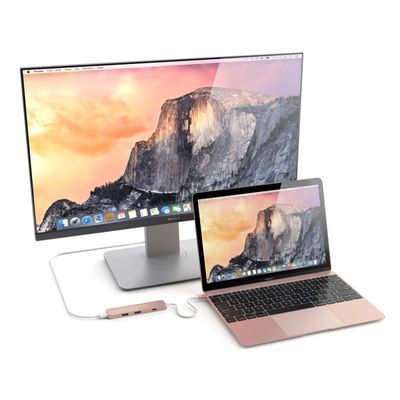 The adapter, which has a sleek aluminum design and comes in colors to match Apple's MacBook line (Rose Gold, Gold, Silver, and Space Gray), features a 4K HDMI port able to output video from a computer to a 4K monitor.

The Slim 4K Multi-Port Adapter also includes two standard USB-A ports and it supports passthrough charging, so multiple devices can be connected to a 12-inch MacBook while it is also charging.

Satechi is selling the Slim 4K Multi-Port Adapter starting today. It can be purchased from the Satechi website for $59.99.

It should be able to carry either signal, but AFAIK in the MacBook's case it would be 1.4.

For many people, those ports are as unnecessary as your comma. ;)
Score: 22 Votes (Like | Disagree)

emm386
These are PRECISELY the ports, the MacBook should have had from the beginning...
Score: 14 Votes (Like | Disagree)

I like it's bold design decisions. The MacBook has an unapologetic vision of all wireless accessories with a powerful dock when needed. If this doesn't work for you, then you have the whole rest of the market to choose from.
It's ok that this one product doesn't meet your specific needs.
For the record, I don't find the MB right for me either. The Pro line suits my needs better. But it is perfect for my wife. The slim size is very important for her and in the year she has had it, I don't think she even noticed that it lacked ports.
Score: 12 Votes (Like | Disagree)

Good point. Well, they could make it a centimeter or two thicker. There’s a point where thinness is nice but useless. This is where the computer becomes a piece of art instead of being a tool. Aesthetics are nice, but utility is far more important.

Then don't buy a "car" when what you want is a "truck." It's that simple. If I wanted a thicker computer I would have kept my MacBook Pro.
Score: 8 Votes (Like | Disagree)

Numerous display prototypes have been in production with the possibility of returning to a full display lineup again (re: CCFL 20"/23"/30" Cinema Displays circa 2004), yet it's always been a "maybe". Ironically, many on the design teams are using some prototypes for daily work. Cooks decision (not Jobs') to drop the full CCFL display line in '08 for a single 24" then 27" LED LCD display using the then current gen iMac LG or Sharp LED panel was purely profit driven. We already had the panels and form factor, using USB 2.0 ports and cables too short to reach a desktop system added insult to injury.

The false notion that the "pro" market is niche irks me. The amount of money studio's, professional photographers (Annie Leibovitz would drop an easy 6 figures a year), etc. spent annually on hardware (30" displays, PowerMac's/Mac Pro's/etc) and editing suite licenses was substantial. Many erroneously assumed the pro market was small and thus lacked demand and profit.

Demand was always there. Studio's invested elsewhere after the fact and their annual marketshare sum was substantial. Apple dropped the ball. They have succeeded in the consumer markets yet lost a substantial amount in professional markets. They drove those to other platforms and suites, and the time and money invested in switching will not bring those back given Apple's current focus. They shot themselves in the foot and claimed the market was the reason, it wasn't. Market saturation and a severely outdated Mac line have investors worried about Apple's future, especially pushing into new markets in China and India in which sales are far below projected conservative estimates.

Cook needs to revisit Jobs' "Quadrant" as product fragmentation within our R&D divisions would make John Sculley proud. Focus and innovation are lacking and it's disconcerting for many of us.
Score: 6 Votes (Like | Disagree)

Where would you place them in the current casing?
Score: 5 Votes (Like | Disagree)
Read All Comments