Opera has warned users of the browser that an unknown hacker has managed to gain access to its sync system, potentially compromising the data of around 1.7 million users.

The Norwegian company said in a blog post that "some of our sync users' passwords and account information, such as login names, may have been compromised" following the hack, and encouraged users to reset passwords for third-party sites. 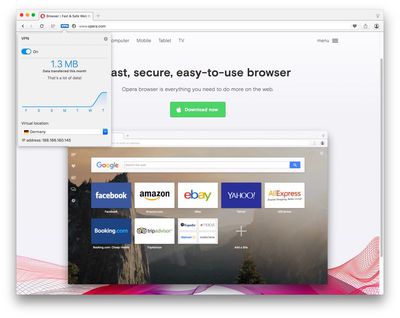 Although we only store encrypted (for synchronized passwords) or hashed and salted (for authentication) passwords in this system, we have reset all the Opera sync account passwords as a precaution.

We have also sent emails to all Opera sync users to inform them about the incident and ask them to change the password for their Opera sync accounts. In an abundance of caution, we have encouraged users to also reset any passwords to third party sites they may have synchronized with the service.

Opera's web sync feature lets uses synchronize their browser data and settings across multiple devices. Opera notes that the total active number of users of the feature in the last month is less than 0.5 percent of the web browser's user base of 350 million people, and that the password reset is a precaution.

Security scares have been a recurring theme for online services recently. Last week, Dropbox told its users that the firm was resetting passwords for anyone who had not changed theirs since mid-2012. The preventative measure was enacted after the company learned about an old set of user credentials that was stolen in a hacking incident nearly four years ago.

pankajdoharey
Just Stop Using Opera. Which world are these people living in, a reasonable alternate browser is firefox or chrome without doubt. Opera just sucks.
Score: 5 Votes (Like | Disagree)

Just Stop Using Opera. Which world are these people living in, a reasonable alternate browser is firefox or chrome without doubt. Opera just sucks.

Yes, one of the reasons I have no plan to go back is that they have now been purchased by a Chinese consortium and it's not built out of entirely kosher companies, some having been involved in some controversies regarding marketing. Opera has now also started adding sponsored links to its Speed Dial view that can be removed but supposedly only temporarily.

Even only one of these two issues would have been a deal breaker for me.

Opera Sync and being Chinese owned? How do I know where my sensitive data really ends up? I really don't want it to somehow, one day end up in a country where the government is known to have deep ties into their cybersecurity business. Maybe it's stupid prejudices speaking here but they'd have to tear down the "Chinese Internet Firewall" at the very least before I'd start trusting them, and we all know that won't happen anytime soon.

So, now I mostly use Vivaldi ('https://vivaldi.com/'). It's what the Opera Reboot should have been anyway.
Score: 3 Votes (Like | Disagree)

Just Stop Using Opera. Which world are these people living in, a reasonable alternate browser is firefox or chrome without doubt. Opera just sucks.

I switched from Chrome to Opera because it is more responsive than Chrome, it offers the same extensions that I relied on with Chrome, bookmark/history syncing across devices, and doesn't drain the battery like Chrome does on my OSX devices.

In my experiences Opera is superior to Chrome. (that's Opera and Chrome of today... historically that had not always been the case)

As for the breech, no company is immune.
Score: 3 Votes (Like | Disagree)

joueboy
They just sold the browser to a chinese consortium and I stop using since I learned about it. I stopped jailbreaking my phone when chinese started taking over. And I don't trust Lenovo computers either. Call me paranoid but it is what it is.
Score: 3 Votes (Like | Disagree)

As someone that has worked in computer forensics for over 10 years and in computer security far longer than that, I can tell you that statement is completely false.

Encryption can make data far more secure but it's never going to be 100% safe.

Proper implementations of thoroughly studied encryption algorithms are secure enough that governments and corporations entrust them with their most sensitive data. If all encryption was as easy to break as you claim we'd all be screwed anyway. If you really worked in computer security, you should know that good encryption is usually not broken, but at best circumvented by exploiting implementation or user errors.
Score: 2 Votes (Like | Disagree)

At least Opera is better browser in general, maybe better than Chrome
[doublepost=1472487642][/doublepost]
Bro, you are not the only one. I don't trust Chinese either

The problem is that the Chinese ethics is different concerning consumers and practically everything else the west believes as far as data and technology privacy concerns. No privacy in Communism and the world forgets this or the younger generation does not know or care .

The Chinese government will not regulate activities to safeguard the users, nor will not keep it private. No class lawsuits will occur, for the government has a hand in the data collecting, spying etc.

Too bad, will say, 'goodbye' to Opera. Like the option to block all ads.
Score: 1 Votes (Like | Disagree)
Read All Comments