Apple today released an iOS 9.3.5 update for the iOS 9 operating system, almost a month after releasing iOS 9.3.4 and a few weeks before we expect to see the public release of iOS 10, currently in beta testing.

iOS 9.3.5 is available immediately to all devices running iOS 9 via an over-the-air update. 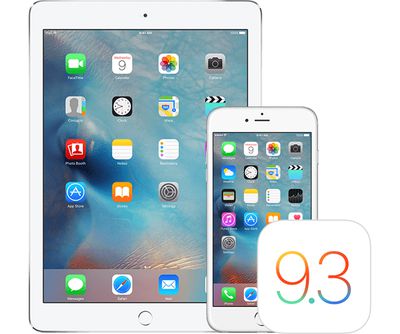 iOS 9.3.5 is likely to be the last update to the iOS 9 operating system, introducing final bug fixes, security improvements, and performance optimizations before iOS 9 is retired in favor of iOS 10. iOS 9.3.4, the update prior to iOS 9.3.5, included a critical security fix patching the Pangu iOS 9.3.3 jailbreak exploit. iOS 9.3.5 features major security fixes for three zero-day exploits and should be downloaded by all iOS users right away.

According to The New York Times the three security vulnerabilities patched in the update were exploited by surveillance software created by NSO Group to jailbreak an iPhone and intercept communications.

In an overview of the exploits, security firm Lookout says NSO Group's spyware software, nicknamed "Pegasus," was highly sophisticated, installing itself through a link sent via a text message.

The exploit was initially discovered on August 11 after human rights defender Ahmed Mansoor received a suspicious link and sent it to Citizen Lab and Lookout. Had Mansoor clicked the link, it would have jailbroken his iPhone and installed "sophisticated malware" able to intercept phone calls, text messages, FaceTime calls, email, and more.

Pegasus is the most advanced attack Lookout has seen because it is customizable, can track a range of things, and uses strong encryption to avoid detection. Lookout believes "Pegasus" had been in the wild for quite some time before it was discovered, with some evidence dating back to iOS 7.

Citizen Lab and Lookout informed Apple of the vulnerabilities and the company worked quickly to implement a fix, patching the exploits in just 10 days.

Is it odd that Apple would release so many updates to iOS over a year? We're at iOS 9.3.5 now.

I like the new Apple that doesn't just sit and hope. I like it that they seem to be pushing forward with more fixes.
Score: 51 Votes (Like | Disagree)

Hmmm. Really? "pushing forward with more fixes"? What about push forward with a release that doesn't require fixes when released. Isn't this like "a ship with a hole in the bottom, leaking water, and [the] job is to get the ship pointed in the right direction"?

Going to throw this out there. Since it is obviously so simple of a task in the minds of many here at Macrumors, why don't you all band together and DO IT YOURSELF? What a novel concept, right? Since it obviously requires just rolling up the sleeves and digging in it should be doable by anyone!

Seriously, you can put up or shut up as far as I am concerned. Reducing the an extremely complex issue to "they should just do it!!!!" is asinine.
Score: 40 Votes (Like | Disagree)

cale508
Not surprising, they are leaving iOS 9 as secured as possible for devices not making it into iOS 10.
Score: 22 Votes (Like | Disagree)

What I'm saying is, maybe the releases are too premature before being made publicly available.

What I am saying is, you have no clue how anything in software development works if you expect a perfect world like you seem to imagine.
Score: 19 Votes (Like | Disagree)

If you paid Apple to avoid updates, you screwed up. Go get a Lenovo Android phone. You won't have to worry about OS updates on that device.
Score: 16 Votes (Like | Disagree)

I wonder if I can get these patches while jailbroken on 9.3.3.

Why do even bother. The fact that your device is jailbroken is already main security problem.
Score: 15 Votes (Like | Disagree)
Read All Comments

Saturday February 4, 2023 10:05 am PST by Eric Slivka
Online retailer TigerDirect has slashed pricing on the M1 iPad Air in several colors, offering the base 64GB configuration for just $313.99 in Purple and Pink. Note: MacRumors is an affiliate partner with TigerDirect. When you click a link and make a purchase, we may receive a small payment, which helps us keep the site running. That's a savings of 48% compared to Apple's normal $599.00...
Read Full Article • 462 comments