First Machines Using Kaby Lake Processors Coming This Fall, but MacBook Pro Not Likely Among Them

Kaby Lake is hardware accelerated for the HEVC Main10 profile, meaning it can "play the highest quality 4K premium content on the market today without a hitch." An HP two-in-one laptop on stage was used to edit 4K video and a Dell XPS laptop was used to show off Overwatch, which ran seamlessly on the machine thanks to Intel's efforts to "push the boundaries of processor graphics."

For those unfamiliar with Kaby Lake, it is the third chip manufactured using Intel's 14-nanometer process, following Broadwell and Skylake. It's a semi-tock with optimized microarchitecture, offering support for Thunderbolt 3, native USB 3.1, and DisplayPort 1.2. 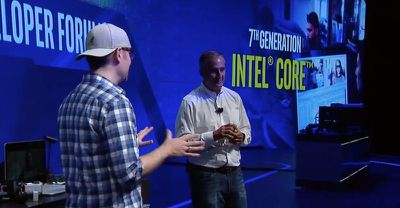 According to Krzanich, Kaby Lake processors are already shipping to Intel's manufacturing partners and will launch in new devices coming this fall, something we already knew following a July earnings call. Krzanich did not provide a further breakdown on when chips appropriate for some of Apple's machines long overdue for updates will launch.

Intel often launches low-power 4.5W Y-series chips and 15W U-series chips first, neither of which are suitable for use in the machine that people are most curious about, the MacBook Pro. According to an old Intel roadmap, Kaby Lake chips appropriate for use in the MacBook Pro, the iMac, and the Mac mini won't launch until the very end of 2016 or the beginning of 2017, meaning any Apple machines released in the fall of 2016 may be limited to Skylake chips.

Rumors suggest the MacBook Pro is getting a major overhaul this year, with a slimmer design, Touch ID support, and a built-in OLED touch panel. There's no specific word on a launch date, but it is expected sometime after the September iPhone event and before the end of the year, pinpointing October or November.

During today's event, along with touching on its 7th Gen processors, Intel outlined Project Alloy, a "merged reality" open source hardware project described as "the next version of VR," allowing objects from the real world to be brought into the virtual world and vice versa. On stage, this was demonstrated with a dollar bill that was used to manipulate a virtual object. Intel also announced TXL labs, a production studio "dedicated to pushing the limits of technology for production," and a new drone platform.

snowboarder
So the long awaited revolutionary new Macbook Pro will be outdated from the start?
Score: 94 Votes (Like | Disagree)

Hog Milanese
Who needs a computer when you can choose one of three different iPad Pros!
Score: 37 Votes (Like | Disagree)

yaxomoxay
2017 Macbook Pro will feature the reliable Intel 386, and the unrepentable 5400rpm hard drive.
We wait for no one.
Score: 36 Votes (Like | Disagree)

Hi! It's me. We used to be friends. My 2011 MacBook Pro served me well. I wanted to replace it a year ago, but decided I'd hold out because... rumor was, something big was coming.

Then you released the MacBook. No Air, just MacBook. Cool, I thought. A Pro model must be around the corner. My current machine just doesn't keep up with the professional software I use as a videographer.

Tim, it's been almost 3 years since a Mac Pro. It's been 15 months since the last MacBook Pro w/Retina.

I'm tired of always waiting. As a Pro, I should feel like your premiere customer. Not your leftovers when you've finished serving the Baby Boomers an overpriced and over-promised iPad "Pro". As an actual Pro who will actually use Pro applications, your iOS offerings make me think you don't understand the company you run.

I feel like Apple has jumped the shark under your leadership. Profitable? You are. Popular? You are. Professional? You no longer are. All of us can see it.

I just build my first PC in almost a decade.
Score: 30 Votes (Like | Disagree)

btrach144
LOL remember the time when Apple actually worked alongside Intel and got early access to their chips for 1 of their computer product releases? Those were the days.
Score: 25 Votes (Like | Disagree)
Read All Comments