In a piece covering Twitter's successful effort to win live streaming rights for Thursday night National Football League games this season, The New York Times reports that Twitter is in discussions with Apple to launch a Twitter app for the Apple TV that would let Twitter's users watch the NFL games on Apple's set-top box. 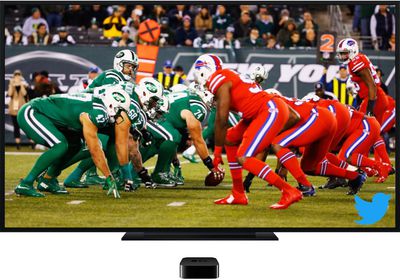 Twitter has directed [Chief Financial Officer] Mr. [Anthony] Noto, a former Goldman Sachs banker with deep ties to the sports media industry, to lead the charge on live streaming and has assigned an engineering team to create its streaming video player. Jack Dorsey, Twitter’s chief executive, considers streaming a critical component of the company’s focus on “live” experiences, along with Periscope, its app that allows smartphone users to live-stream video.

To bolster the effort, Twitter is in talks with Apple to bring the Twitter app to Apple TV, which would potentially let millions of Apple TV users watch the streaming N.F.L. games, according to the two people briefed on the discussions.

Beyond the NFL, Twitter continues to strike deals for other live streaming content, and while the company's strategy for live streaming is not yet "fully formed," Twitter is considering how to bring that content users either in the main timeline or in the Moments tab of the current app for various platforms.

The NFL had solicited a number of companies, including Apple, to gauge interest in streaming rights for Thursday Night Football, but Apple ultimately declined to submit a bid.

drumcat
I, for one, appreciate the sense of irony MacRumors used in selecting a picture from the ColorBlindBowl game.
Score: 7 Votes (Like | Disagree)

Still no "edit" button and no anti-harassment policy. Priorities I guess....

I think an edit button for tweets is a non-starter. They're necessarily short, you can post a newer one. A machine can't tell if a tweet is being edited to only fix a typo, vs. changing the meaning. If they allowed editing, you'd have endless cases of folks getting hundreds or thousands of likes/retweets and then editing their tweet to "Retweet if you like Hitler and Satan!" or some variation. Think of how much fun that would be, say, in the political arena.

Agreed on anti-harassment. They need to be doing more than they are.

That said, this... this looks like Twitter "pivoting", trying to use their name recognition to make themselves into a media company instead of a text-message-broadcasting service (since it's hard to make money off the latter).
[doublepost=1471233586][/doublepost]

And the NFL thinks they can handle the streaming load?

Maybe Twitter's plan is just to send one guy with an iPhone to sit in the stands and use Periscope to broadcast it.
Score: 6 Votes (Like | Disagree)

Someone tell twitter there's a NFL streaming app and it's my called My Cable Providers Streaming App. They too have a streaming app. I use it all the time on my iPad and iPhone.

That works great for you, what about everyone else? Or do we all have to come over to your house to watch the game?
Score: 6 Votes (Like | Disagree)

macduke
As a cable cutter since 2010 (instead invested the money along with some other smart budgeting and made enough to buy cars with cash and have minimal debt), I've given up on trying to watch sports. Trying to watch the olympics has been worse than cancer, and NBC won't even let clips of it be shown most of the time, and the clips they do post on YouTube are 30 second blips and many of them don't even show what happened or who won. There was a freaking clip of them showing Usain Bolt walking out and that was it! I'm done. I don't care any more. It's not worth it. I try to navigate all these stupid packages online for MLB and NFL and for what? To get blacked out so I can't even watch, even though I live 120 miles away from these teams? Half the stupid DTV signals don't reach my house. Adding an amplified antenna from Leaf (the premium 50 mile one) ends up causing me to lose a bunch of channels (they get blown out from what I've read online since those ones are closer), while I end up adding a couple I don't care about and still not even get CBS for AFC games which is only 25 miles away over gently rolling hills. So yeah, I've just decided to stop caring. And no, I don't live in a small town and have decent 150mbps internet with some parts of town getting gigabit.
Score: 4 Votes (Like | Disagree)

Someone tell twitter there's a NFL streaming app and it's my called My Cable Providers Streaming App. They too have a streaming app. I use it all the time on my iPad and iPhone.

Does YourCableProviderApp™ work outside of the Good Ol' U-S-of-A?

This is why owners with money want an NFL division in Europe and "Joe Fan" thinks it's terrible. The TV rights outside of North America are potentially enormous. It's clear there is an appetite for it, and yet #mericuh thinks that's all there is. Well, la-ti-da Mr. I Have Cable. The world is evolving, and your bubble isn't as relevant as you believe.
Score: 2 Votes (Like | Disagree)
Read All Comments