Dropbox today announced the expansion of its collaborative document editing service "Paper" onto mobile devices running iOS and Android. Paper originally required an invitation to join its beta, but the company is now also opening up access to anyone who's interested in trying out the service, either on desktop or mobile.

Paper lets work teams tackle projects at the same time, within a singular document, and even embed videos, images, and more to create successful projects. With feedback from its first beta users, Dropbox has introduced a few new feature updates to Paper as well: image galleries are easier to create and edit with drag-and-drop functionality, both web and mobile apps now have notifications, and Paper's search has been boosted "to help you quickly find the docs you need." 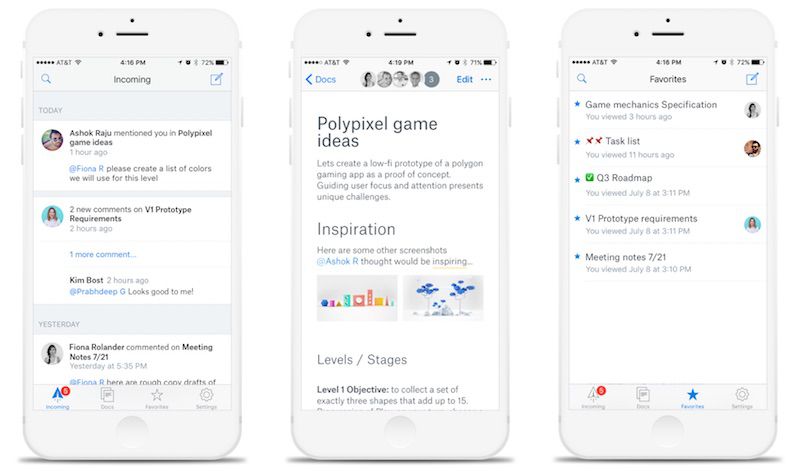 "From a strategy perspective, Paper's right at the center [of Dropbox]," Dropbox project manager Kavitha Radhakrishnan said. "We're looking at Paper as being a core part of the Dropbox experience, and our momentum over the last year should be a pretty strong signal about how seriously we're taking this."

In an in-depth dive taken by Engadget, Paper's new iOS app positioned itself as a mobile companion to its desktop counterpart. With the app, users will be able to read notifications, check out which team member is editing and participating in what document, and respond to direct messages sent their way, but any robust editing or creation tools are left out of the mobile app. Still, "basic document editing features" will allow for quick text and image edits, and the app even automatically saves any document marked as a favorite so it can be worked on and edited offline.

Dropbox is encouraging anyone interested to sign up for the open beta of Paper today, as well as downloading the free app from the iOS App Store [Direct Link] and Google Play Store.

2457282
Pages is almost there, just not quite. I wish Apple would invest more in their iworks components. Then we really would not need to talk about Paper or Evernote or any other tool.
Rating: 2 Votes

DCYorke
Sadly it's too little too late for me. I tried their beta (web app) a year ago. The iOS apps were always "coming soon". We've since moved on to other solutions. And now in iOS 10 / Sierra we'll have shared notes.
Rating: 1 Votes

I'm gonna be honest with you. I don't think Apple really cares about the iWorks suite... anymore. Initially, I think they had grand designs of it competing on a level with MS Office. I think the realization hit that it would never really be possible and they transferred their attention to endeavors where success was much more likely. iWorks works <-- tee hee. But it only works in the vacuum inside the Walled Garden. Like you said, if it worked with Dropbox and other storage services it might get more traction. I actually like the iWorks suite. It's intuitive, easy, and could probably handle 70-75% of my productivity needs. But I rarely ever use it because it only works with my Apple kit. MS Office? Works on everything. Google Apps? Works on everything. Both suites play well with all of my stuff, including my Apple stuff. If Apple gave the iWorks suite some exposure outside of the Garden it could gain some traction. As it is, I fear it's going to wither on the vine.

Boy I hope your predictions are wrong (but they may not be). I have never been a fan of office -- it is pretty bloated and creates havoc on machines and now that it is a subscription service, I am not sure I will ever use it outside of work. I used openoffice a lot, but once Oracle bought it, I have not seen it evolve and now seems stuck in a day gone by. I am not a fan of google - period. So I was really hoping for Apple to step it up. really, all i need is pivot tables in numbers and in pages I need table of content, foot notes and one or two other things to write professional papers. Since I live in the garden, I do not need the link to the outside world, but agree it is needed to gain traction. the useability is already there and is more intuitive than pretty much everything else. Keynote is already better than powerpoint.

It does look like in the services area however, Apple has no idea where it is headed. They tried the web based version of these tools and making them free, but seem to have totally abandon them since. Maybe we all get surprised in September (one can dream, right?).
Rating: 1 Votes

Will it replace Evernote?