Users looking to get the most out of Siri may want to check out Hey-Siri.io, a new website that launched in July. Hey-Siri.io features a comprehensive list of many of the different Siri commands that are available, giving iOS and Mac users a quick way to discover all of the different things Siri can do.

Organized into categories like Apps & App Store, HomeKit, Notifications, Conversion, Messaging, Calendar, Translation, and more. Each section, which can be scrolled through on a single page, includes a range of different Siri commands relevant to each category. 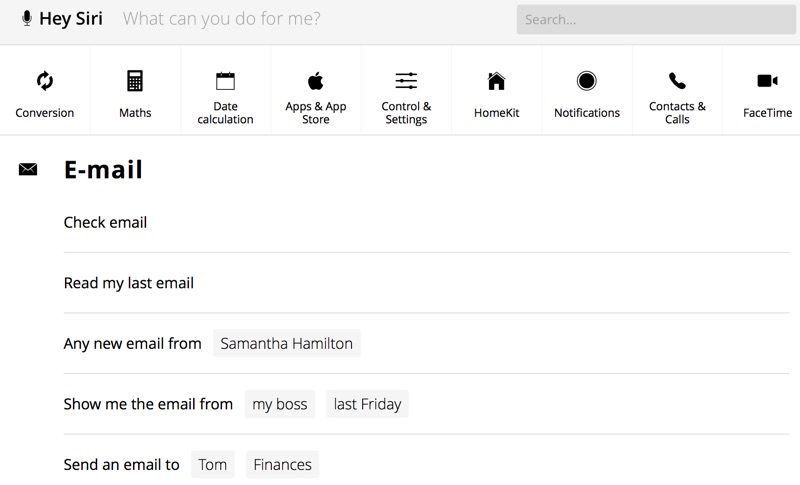 When using Siri, Apple includes a list of sample commands in a "Some things you can ask me" popup, but it only scrolls through a handful of messages and isn't as comprehensive or useful as the Hey-Siri.io website. Hundreds of commands are included on the site, including some of Siri's more humorous responses to questions like "Knock, Knock" or "Why did the chicken cross the road?"

While Siri is only available on iOS devices at the current time, starting this fall, Siri will also be available on Macs through macOS Sierra. Hey-Siri.io includes both iOS and Mac commands, and switching between them can be done using the Settings button on the site.

Is there a reason they say "maths" instead of just plain "math"? I've also been seeing this a lot on Quora lately. Am I missing something? Growing up I always heard it called math.

ncbetz
This is very neat. Thanks for sharing, I will be giving this a look for sure!
Rating: 1 Votes
[ Read All Comments ]