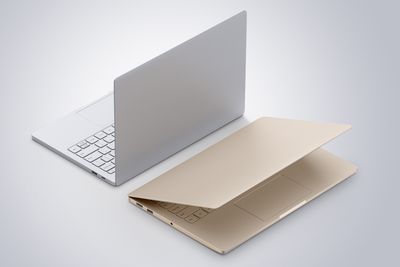 The company also announced a smaller 12.5-inch (2.36 pounds) model with an Intel Core M3 CPU, 4GB RAM, a 128GB SSD, and integrated graphics, costing $540 in total. Both laptops have a full-size backlit keyboard. The Windows-installed machines will be available in China from August 2, but no details regarding global availability have been given.

According to CNET, Xiaomi partner Tian Mi will manufacture the Mi Notebook Air. Rumors that the smartphone maker was seeking to enter the PC laptop market have been bubbling for a while, and its unapologetically titled debut offering leaves no doubt the company is seeking to emulate – not to mention compete against – Apple in the Chinese market, albeit in the form of a more budget-conscious package.

Xiaomi saw flat revenues last year, with the struggling smartphone sector making up 90 percent of its sales. The move shows the company sees untapped potential in the Chinese consumer notebook market despite suggestions that it may be on the verge of contracting, which indicates the company is also willing to take a risk as it attempts to justify its $45 billion valuation.

Those are two beautiful notebooks. In my opinion.

Only haters will say anything different.

What a logical fallacy this is. "If you disagree with me, you're a hater".

If you genuinely believe Windows is more reliable and considerably less buggy than OS X, you haven't had enough experience with computers as far as I'm concerned.
Score: 18 Votes (Like | Disagree)

Gabs_
Those are two beautiful notebooks. In my opinion.
Score: 16 Votes (Like | Disagree)

Only haters will say anything different.

I use Windows 10 and Mac OS, and while W10 did huge leap from other windows and it is a very good os, it is still behind... Mac OS would be my choice anyday.

Not a hater as really like windows 10, but to say that is better than Mac OS is delusional at best!
Score: 15 Votes (Like | Disagree)

japanime
"Surprises"? Really? Who among us is surprised that Xiaomi has knocked off yet another Apple product? :D
Score: 14 Votes (Like | Disagree)

markfc
Now, if they were smart, they'd make these easily hackintosh-able. I bet they'd shift a few.
Score: 14 Votes (Like | Disagree)
Read All Comments