According to the Apple Pay Hong Kong website, Apple Pay support will be coming to Hong Kong's Bank of East Asia and Tap & Go in the near future. 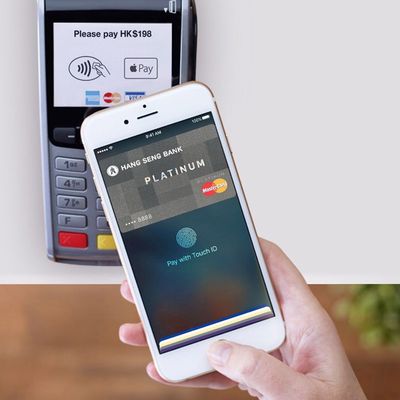 Cards can be added to Apple Pay by tapping the "Add Credit or Debit Card" option in the Wallet app on devices running iOS 8.1 or later. Apple Pay works with the iPhone 6, iPhone 6s, iPhone 6 Plus, iPhone 6s Plus, and iPhone SE, and it is available on the iPhone 5, 5c, and 5s when paired with an Apple Watch. Apple Pay in apps is also available on iPads with Touch ID, including the iPad Air 2, iPad mini 3, iPad mini 4, and both iPad Pro models.

Apple Pay is now available in the United States, the UK, China, Australia, Canada, Switzerland, Singapore, France, and Hong Kong. Later in 2016, Apple plans to expand Apple Pay to Spain through a partnership with American Express.

iTom17
Please Apple, show the Netherlands some love! We've got plenty of NFC terminals over here that are dying to be used. :P
Score: 3 Votes (Like | Disagree)

MH01
Just got an email from Barclays that android pay is live. That's a big shock from a bank that takes forever to implement. Be interesting how it compares
Score: 2 Votes (Like | Disagree)

Why Citibank is not joining? It's the only major bank absent from the list. :confused:

in singapore, citibank went with Android Pay instead. quite disappointing. I think they might have an exclusive period with Android Pay.
Score: 1 Votes (Like | Disagree)

Thanks for the information. That's why. Bad choice for them. So they will lose a loyal customer.

we are still lacking of a few other bank to join Apple Pay too, e.g HSBC
But i must say that Android Pay had dished out good initial promotion. They have $2 discount for a minimum spending of $3 at a global bakery chain. Imagine paying $1 for goods worth $3.
Score: 1 Votes (Like | Disagree)

hi
good news.
does this mean that if you have an HSBC account in HKG you can now use your HSBC issued credit card, for example, in the USA, or any other country that apple pay is offered?
thanks.

I think so!
[doublepost=1468976254][/doublepost]I added an HSBC card to my wallet but I couldn't add it to the watch. The watch app just told me to contact the bank. Weird.
Score: 1 Votes (Like | Disagree)
Read All Comments