Apple Maps has been updated with comprehensive transit data for the U.S. cities of Honolulu, Hawaii and Kansas City, Missouri, enabling iPhone users in the areas to navigate using public transportation, including buses and commuter rails. 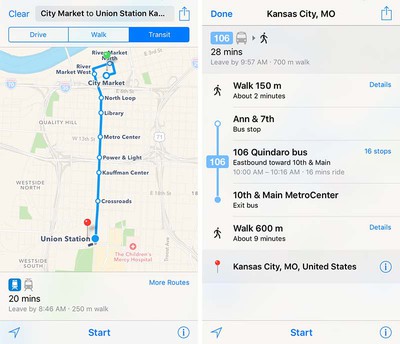 Transit routing options in the Kansas City metropolitan area include RideKC buses and the downtown KC Streetcar. Directions extend to most suburbs in both Kansas and Missouri, including Overland Park, Olathe, Independence, Lee's Summit, Shawnee, Blue Springs, Lenexa, and other smaller communities.

Transit routing options in Honolulu include TheBus buses, with directions extending to destinations across the entire Oahu island.

The feature has since expanded to a number of additional cities and regions around the world, including Atlanta, Denver, Miami, Montréal, Portland, Rio de Janeiro, Sacramento, Seattle, and New South Wales, Australia.

truettray
Awesome. Now I can know how late our useless streetcar will be to pick me up to go nowhere.
Score: 2 Votes (Like | Disagree)

2457282
I find these transit updates to be WAY more useful than the flyovers. Hopefully they will focus more on transit. :)
Score: 1 Votes (Like | Disagree)

Gasu E.
All these little US Cities!! What about East Blobnigburg in the Republic of Crocknia?!!! Fess up, Apple, you hate Crocknians!
Score: 1 Votes (Like | Disagree)
Read All Comments

Friday July 10, 2020 2:58 am PDT by Tim Hardwick
At last month's WWDC, Apple officially announced that its Mac computers will be transitioned from Intel x86 to homegrown Apple Silicon chips. Apple said it plans to deliver the first Apple Silicon Mac by the end of the year and complete the transition in about two years. According to Apple analyst Ming-Chi Kuo, a 13.3-inch MacBook Pro with a form factor similar to the current 13.3-inch...
Read Full Article • 184 comments