Ahead of the 2016 Worldwide Developers Conference, Apple's Maps team is working hard to expand transit directions to additional locations. Starting this morning, transit information in the United Kingdom has expanded to encompass the National Rail, which represents several public transportation systems across Great Britain. 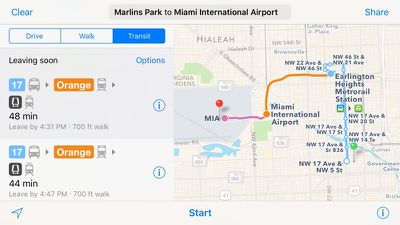 Apple also appears to have expanded transit directions in California to encompass Santa Cruz, Monterey, Salinas, and other surrounding areas.

When transit directions launched in 2015 as part of iOS 9, they were only available in a handful of cities, but Apple has now expanded availability to more than 20 locations around the world.

After four years, Apple has a handful of major cities. It's almost like a joke, I can't understand it.

Is Eddy Cue, by any chance, in charge of this?
Score: 4 Votes (Like | Disagree)

Google Maps was started 11 years ago which means they have a 7 year head start on Apple Maps - maybe THAT you can understand.
[doublepost=1465518934][/doublepost]


Google Maps was released in Feb 2005 - Apple Maps in September 2012 - that's a 7 year head start - 7 years to add all the roads, rivers, railways and bus routes before Apple even got into Maps.

And remember why Apple got into the Map business in the first place - because Google refused to give the Apple version of their Maps App feature parity with the Android version, that is until Apple dumped them in favour of their own Maps App.

Google didn't take this long to add a small handful of major cities. Like I said, it's a joke. They are doing it wrong--they should be plugging into existing transit info for most cities. Instead, they're taking their sweet time to do each city in their proprietary, finicky way. They need to quickly upload the basic info FIRST, then go back and do the fancy stuff. Like I said, most transit authorities in the developed world already have their schedules readily available and updated daily.
Score: 1 Votes (Like | Disagree)

I resigned a long time ago w the maps app and basically use google maps 90% of the time. Apple should actually spend money to fix the actual maps instead of adding stuff for a handful of cities. Looks cute in their presentation but real life it doesn't matter to most people that don't live on those cities.

Don't worry Apple fans I'm sure Apple is ready to bring us another sub based new app that can't be erased as well.

Wrong type of leaves on the track. ;)

SBlue1
Lol. Apple should add dozens of cities around the world each day. Holy cow. How many people are in the Maps Team? Two??
Score: 1 Votes (Like | Disagree)

Rafagon
OS X actually notified me of this fact today. iOS didn’t do it. Or at least, not that I saw.