An Apple patent was published today detailing a headset and communications platform that uses point-to-point network technology instead of cellular (via AppleInsider).

The proposed headset comes with an assortment of audio hardware including the requisite microphone and speaker, and also features a communications module that enables it to interface with other headsets in close proximity. 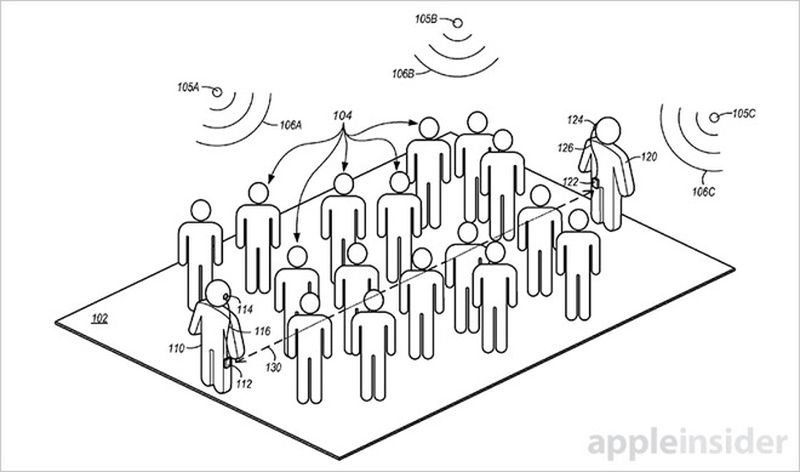 In some versions, the device connects via Lightning or standard headphone jack to a mobile device, allowing for the possibility of special interfacing software. The use of Wi-Fi, Bluetooth or similar protocols are favored over typical cellular or satellite communications, allowing for extremely low latency communications and reduced delay between devices in close proximity.

The exhaustively detailed patent was drafted by a former Sennheiser engineer, and amounts to what could be described as an enhanced walkie-talkie system with touch-enabled, icon-based GUI for establishing connections between peers.

As with all patents, the invention may never see the light of day in any consumer product, but the device does hold interesting possibilities for use by Apple Store staff or between development teams in Apple headquarters.

samcraig
I'm guessing this is less for the consumer and more for their stores.
Rating: 4 Votes

I'm guessing this is less for the consumer and more for their stores.


I could see this in the theatre where stage crews have to communicate, walking tours, or anywhere really, where intercom communication is desired.
Rating: 3 Votes

I'm a bit more inclined to agree with Sam. Might be good for their stores, but outside of that I can't see the practicality of it. 1. It's lightning - proprietary. There's a ton of standard communication options available and in use that would be far more practical and cost effective. 2. Proximity - If there's a need to be fairly close, as with wifi/BT, what's the point? 3. Cost - The patent didn't specify, but my assumption is the headset would connect to an iPhone. If that's the case, what would be the logic behind deploying iPhones + the headset when more cost effective and efficient systems already exist?

Somebody help me here. Can someone come up with a scenario where this would be better than anything already out there?

This patent is definitely not going to meet India's definition of "cutting edge" technology.:D
Rating: 2 Votes

SSD-GUY
So Apple is moving away from phones, and into the Walkie-talkie business?

Carlanga
Interesting that this can be patented.
Rating: 2 Votes


How about with automatic translation built in?
Rating: 1 Votes

Shirasaki
Good for junior and senior classroom, maybe good for university classroom as well.
But, why Apple don't use this technology plus NFC to enhance Apple ecosystem capability? Like downloading only one photo from iCloud into one device, and all other devices intelligently sense this action and download then from that device, rather from iCloud again?
Rating: 1 Votes

2457282
Reminds me of Nextel push to talk phones to some degree. Not sure what use cases this would work for.
Rating: 1 Votes

konqerror
Not new at all. They've had the exact same thing for motorcycle helmets for years, complete with app and ride-up social features.
http://cardosystems.com/portfolio-item/packtalk-2/
http://www.sena.com/product/20s/
Rating: 1 Votes
[ Read All Comments ]