The vehicles gaining CarPlay support through a software update join Hyundai's previously announced CarPlay models, the 2016 Sonata, 2017 Elantra, and the 2017 IONIQ. Hyundai has not officially announced the news, but dealers were sent a notice about the update on May 19. Dealer information suggests the update is supposed to be available as of today, May 24. 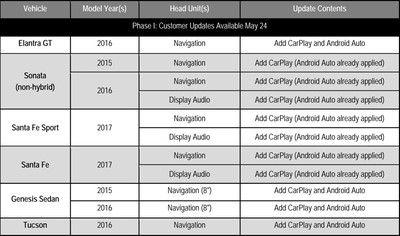 Hyundai owners with an eligible vehicle can download the CarPlay update through the Hyundai website and are encouraged to go through the installation process themselves. A Mac or PC with an SD card slot or an external SD card reader is required to download the software and transfer the update to the vehicle's in-dash system. Software download times range from 25 minutes for Display Audio to more than three hours for Navigation if a map update is required.

CarPlay took several years to roll out to new vehicles, but there are now dozens of 2016 and 2017 vehicles available with CarPlay support. Apple maintains a list of vehicles that come equipped with CarPlay on its website, which sees updates every few weeks.

oghowie
Damn, I wish all manufacturers would do this. MB never released CarPlay for the C class they demoed a few years ago.
Score: 4 Votes (Like | Disagree)

DrumApple
I wish Jeep/Chrysler would release theirs already! And it better include 2016 models or I'll be fuming.
Score: 2 Votes (Like | Disagree)

Nice!
How big was the download?
And does it connect through BlueTooth or cable?
Also: can you now see the same music layout as on your iPhone? For example the albums, playlist, artists and numbers?
And last one: what does "Maps" do? Does it launch the Hyundai stock navigation, or does it launch Apple Maps? If Apple maps launches, can you also still use the stock navigation?

1. About 1.4 gigs
2. Both, settings on iPhone to change it
3. Music app is actually pretty awesome. Access to playlists, artists, for you, new, and more.
4. Maps launches Apple Maps. You can switch back to Hyundai at the home screen.
Score: 1 Votes (Like | Disagree)

Website is down for me. Maybe they're updating it now..?

I definitely did, but it had a submenu that said Android Auto. That submenu went away this morning, and I got the screenshot you saw earlier.

Would love to see more car stereo head unit models with CarPlay. I drive some old brick of sh*t and it seems like thats not going to change for a while.

There are some aftermarket CarPlay compatible units starting to appear, so we owners of old POS cars or trucks do have some hope... :)
Score: 1 Votes (Like | Disagree)
Read All Comments