The OS X 10.11.6 update, build 15G7a, can be downloaded through the Apple Developer Center or through the Software Update mechanism in the Mac App Store. 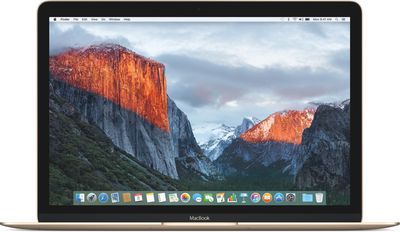 We don't know what improvements the sixth update to OS X El Capitan might bring, but like prior updates, it's likely to focus mainly on performance improvements and bug fixes to address issues that have popped up since the release of OS X 10.11.5. According to Apple's release notes for the update, OS X 10.11.6 improves the stability, compatibility, and security of Macs.

OS X 10.11.5, the previous update, was also minor in scale and offered only bug fixes with no obvious outward-facing changes.

coolfactor
Come on Apple, this is boring. Where's all of the viruses and crashes and vulnerabilities in OS X? People want Macs to be more like Windows! They expect a confusing and convoluted user experience. They expect every "program" to look and behave differently. They expect to have to dig through 6 layers of settings just to find that one that will make their program work the way that they think it should. They expect to have to sift through 1000 features that they'll never use. They promise to never update their programs because if it ain't broke, don't fix it, right?

On a serious note, Apple, thank you for making a stable, reliable, easy-to-use operating system that works really well. Thank you for adhering closely to a high standard of user interface design. Even though you're not perfect, and you're often distracted by misguided opportunities to "advance" the platform, you've managed to deliver the goods time and time again. I encourage you to keep that flame alive, to never forget why Macs are so loved, and to continue to deliver only the best experience that you can.
Score: 22 Votes (Like | Disagree)

I think this is because they fix 2 things and break 3 things. Maybe its time to get a new team and try a different approach.

I'm sorry to just call you out, as I'm sure there are going to be similar comments to yours on this thread.

However it's blatantly obvious to me that you really haven't experienced Windows. There are CONSTANT updates that brick this and that. People talk a lot about how great Windows 10 is, but when you're doing tech support 40 hours a week, some of the stupid, crazy, backwards bugs you encounter will blow your mind; problems that are so face-poundingly frustrating to fix, so niche, so ridiculous; the incompatibilities, things randomly not working, driver issues, registry issues, malware issues ...

Christ, even Microsoft Edge issues! Heck, have you ever tried to RESET Edge if it doesn't even open?! You know, one of the fundamental things that a browser should be able to do? If IE doesn't open, you can reset it through inetcpl easily enough. But not with Edge. You have to shift-delete a load of hidden files and redownload the components through PowerShell. We're talking about RESETTING a browser.

And God forbid if you need to get a Surface fixed. Leadtimes of a month or over are not uncommon. If you had a repair with Apple that took more than a few days, you'd be spitting bricks.

Let me absolutely assure you that OS X and Macs in general are a bloody breath of fresh air. They always have been since I began using them with Pro Tools at University, and you'd bet your bottom dollar that they still are. They're far from perfect, granted. But they're comparatively SO easy to troubleshoot and way more reliable, both with regards to software updates not balking, and hardware not failing.
Score: 15 Votes (Like | Disagree)

There are people who say all these updates are signs of poor quality at Apple, but I find it all very impressive. The ecosystem has added an incredible level of complexity to the process; so many more places and ways that an upgrade or bug in one part of the system may have to be addressed across many other parts of the system. The fact that development teams can issue as many as four OS update in lockstep (OS X, iOS, Apple TV, and WatchOS), and that those may have to go hand-in-hand with server-side updates at iTunes/App Store/Apple Music, Maps, iCloud... And on top of it, the OSes are more, rather than less secure.

The traditional Mac model was that Apple managed to carry a huge proportion of the Mac user base to the latest current release. That's great for developers and for Apple because it provides a unified ecosystem. That process culminated with Mavericks ... because Mavericks is still the best Mac OS X out there.

Subsequently, all the energy and effort expended by Apple on subsequent upgrades is largely being wasted ... the process of bringing users along to the latest version is crumbling as millions of Mac users stay on Mavericks or earlier, simply because subsequent OS X releases (Yosemite and El Capitan) are so un-Mac like, and so unpleasant to use ... mostly for visual UI issues.

Have you seen the rating of El Capitan at the Apple Store?? It must have the lowest user rating for any Mac OS version ever released. That's not progress.
Score: 10 Votes (Like | Disagree)

I hope this means Apple will return to an 18- or 24-month intervall between major releases (as they did before the release of Lion).
Score: 9 Votes (Like | Disagree)

The traditional Mac model was that Apple managed to carry a huge proportion of the Mac user base to the latest current release. That's great for developers and for Apple because it provides a unified ecosystem. That process culminated with Mavericks ... because Mavericks is still the best Mac OS X out there.

Subsequently, all the energy and effort expended by Apple on subsequent upgrades is largely being wasted ... the process of bringing users along to the latest version is crumbling as millions of Mac users stay on Mavericks or earlier, simply because subsequent OS X releases (Yosemite and El Capitan) are so un-Mac like, and so unpleasant to use ... mostly for visual UI issues.

Have you seen the rating of El Capitan at the Apple Store?? It must have the lowest user rating for any Mac OS version ever released. That's not progress.

I think the statistics say otherwise. https://www.netmarketshare.com/operating-system-market-share.aspx?qprid=10&qpcustomd=0&qpob=ColumnName+DESC - I've used those figures to calculate share figures for each platform separately.

Personally, I never pay attention to user ratings of OSes - they're never better than middling, because so many people hate change. As with most Internet polling, people with negative opinions are far more likely to vote than those who are satisfied.

New-version adoption rates have gone through the roof since Apple moved to the free update model with Mavericks. I don't recall there being hordes of Mac users running out to buy the latest OS X DVDs. They had to pay, after all! If I was to judge by postings here at MacRumors, nobody paid to upgrade from Snow Leopard to Lion or from there to Mountain Lion (although the numbers say otherwise). It was all, "Don't upgrade, Snow Leopard is perfect!" (Well, you see that with every new OS release.) Among other things, free distribution was designed to bring all those "stragglers" along, and it seems to have worked pretty well. Large numbers upgraded directly from Snow Leopard to Mavericks.

It can be a mistake to project your particular preferences upon the rest of the public.

I'm sure you're quite aware that nearly every version of OS X is considered "the best" by a particular constituency. I find it particularly interesting that many of the negative comments in this thread have had to do with the appearance of the OS, rather than the technology. Some people care more for appearances than others - I'll take tech/features over appearance every day of the year.

I still don't understand what "flat" really means, but I'm not a graphic artist, so I'm not dialed into that particular lingo. Everywhere I look, I see drop shadows, translucence, and other features that add a greater sense of depth. The Apple icons on the dock aren't monolithic blocks of color, there are gradients everywhere.
Score: 8 Votes (Like | Disagree)
Read All Comments