Speck today announced the official launch of its Pocket-VR accessory, a collapsible, portable virtual reality headset designed to be compatible with its line of Candyshell Grip cases. The Pocket-VR was created using Google's Cardboard VR specs, so it is able to display content created for Cardboard. 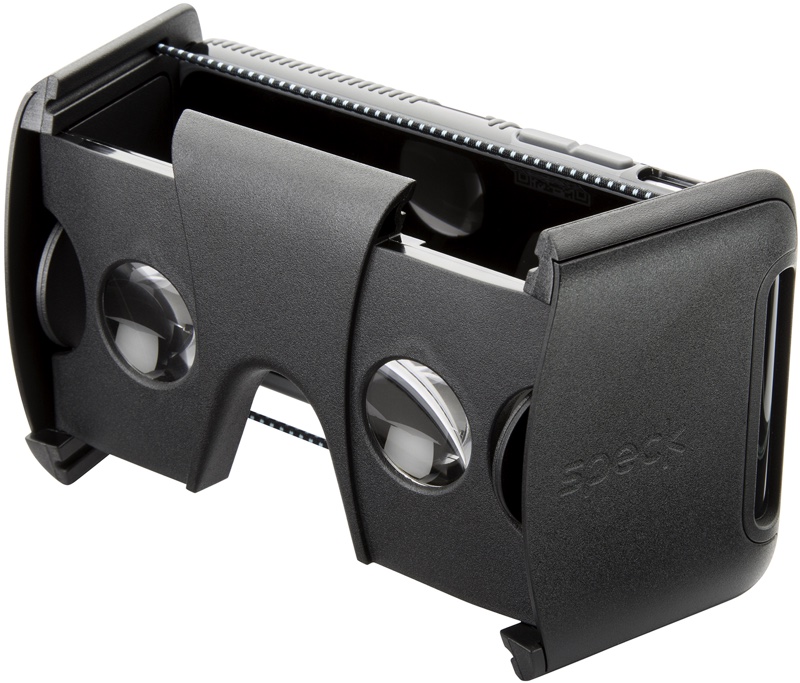 The Pocket-VR, made of black plastic, comes with a black and gray CandyShell Grip smartphone case, which it snaps over to create a virtual reality viewing experience on the go. When not in use, the Pocket-VR's retractable side panels fold flat, allowing the accessory to be carried easily in a pocket. Speck is offering the Pocket-VR for the iPhone 6 and 6s only, which is not compatible with larger iPhone 6 and 6s Plus models. 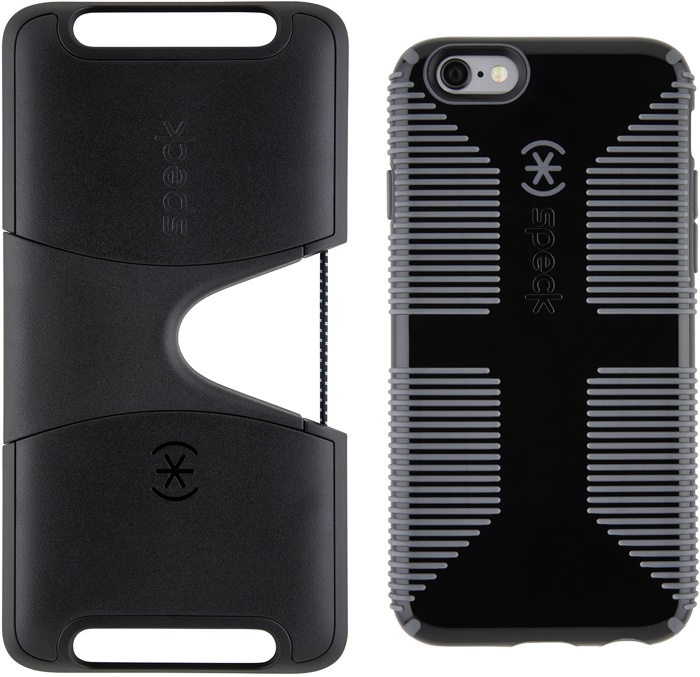 Speck's CandyShell Grip case can be used even when the Pocket-VR is stowed away, offering full military-grade drop protection for an iPhone. It includes a raised bezel to protect the screen and it has raised rubber ridges for a solid grip.

The Pocket-VR can be purchased from the Speck website for $69.95.

Dr.Chroma
This is what I have always wanted, a collapsible, compact, VR headset to carry in my pocket and put it on in the grocery store and walk around with it on my head.

It does not matter if you don't care. Many people do care.
VR has been promised for decades, and we are finally at the point where it can work. We have cheap devices for quick fix video content and simple games, and we have big feature rich implementations like the Vive. But most importantly we have a lot of content being created.
Rating: 2 Votes

nagromme
Pretty slick! I give VR demos (for work AND play) fairly often, and something like this would work great tossed in a bag for times when my larger Cardboard-compatible unit (much less my Oculus and Mac) is not with me.

The Best VR Headset is the One You Have With You.

Shame the phones have such low pixel densities. VR looks awful on my 6s.

Weird. Looks awesome on my 6+. Not that different. Your standards for cheap VR may vary, which is fine—but I don't see the "screen door" unless I look for it—and more pixels would tax the CPU harder. True pocket VR is here and it's awesome, but it's going to be a trade-off in some ways. Darned physics.

People were blown away by the first Oculus Rift which was WAY lower res than an iPhone. And now you have it in your pocket, running iOS! Not bad.

The biggest difference isn't the hardware, it's the software: one app can be terrific on a given device, another can be a laggy mess. I recommend Google Street View, YouTube, and Proton Pulse as fun iPhone VR apps.

Still not so much as a strap or anything to actually hold this to your head...

That seems like such a simple thing that makes the $900 HTC Vive worlds better...

a) You are tangled and tethered to a roomful of other gear.

(As for Samsung's Cardboard-alike, it's cool and I support the endeavor. But not for the price and being limited to a single phone--lacking Metal performance--that you won't keep forever. You can get a strapped Cardboard headset for way cheaper.)


Excellent question. It seems unlikely that you'd be the only one. There are SO many people in the world.

But we'll probably never know, because nobody would actually spend their time posting "I don't care about this story." They wouldn't even get past the headline, surely.
Rating: 1 Votes

Chupa Chupa
Speck: the size of one's brain for paying $70 for what is essentially a $10 Google Cardboard viewer.
Rating: 1 Votes

iThingsGurl
This is a good idea. Google should've thought about it.
Rating: 1 Votes

Khalanad75
Am I the only one that has no real care for VR, whether it be for gaming or anything else.
Rating: 1 Votes


Neither did I.
Until I actually tried it.
Rating: 1 Votes

I was watching a clip of mostly older tech journalists at a tech expo sitting around with these ridiculous contraptions on their heads. It looked like an old black and white film reel from a 1920's World Of Tomorrow expo. You know the ones, where something is so preposterous you think how could anyone believe it would be a real thing,
Rating: 1 Votes

MrGuder
I don't understand what this is and why I need it? Virtual reality what?
Rating: 1 Votes
[ Read All Comments ]