The launch of the fourth-generation Apple TV, with Siri integration and a full App Store, resulted in a huge Apple TV sales boost, according to new data shared by Parks Associates. In 2015, Apple TV unit sales were 50 percent higher than unit sales in 2014. 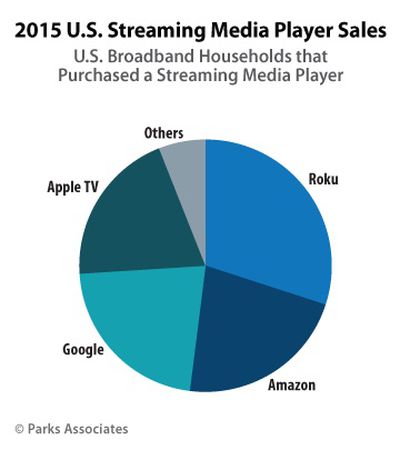 While Apple TV remains in fourth place among the four major brands, it had the largest increase in unit sales year-over-year, primarily due to its long-awaited new version, launched in 4Q 2015. Its share of sales in 2015 was 50% higher than its share in 2014. Amazon also had a substantially higher share of unit sales in 2015.

Since Apple just released its latest Apple TV set-top box in October of 2015, there's no word on when another update is planned. Apple has recently been working on building out the tvOS software included on the fourth-generation Apple TV, introducing much-needed new features like dictation, app folders, and Bluetooth keyboard support.

2457282
I like my ATV 4 and like seeing Apple continue to invest in upgrading the features. Here are a few nice additions for the future if you are interested -

1. Adding a earphone jack to the remote (a la Roku) - well I guess with the lightning port maybe they already have it and just need to enable it.
2. Better controller support for gaming. I tried a couple in store and found them not great and the remote is terrible for all but a few basic games.
3. Better deals with providers so that their apps work without having to log into my non-existing cable account.
4. Amazon Prime (I know this is an Amazon problem not Apple, but still want it).
5. Homekit App to control things though the TV. Actually would love some integration that could set the lights and sounds based on what was playing.
Score: 11 Votes (Like | Disagree)

Crosscreek
Been using Roku since the first generation and never had a reason to switch.
Score: 8 Votes (Like | Disagree)

How many 4K TVs are actually being sold every quarter? 4K content is still pretty limited as well.

By that logic, the USB-C connector was a really poor choice for the MacBook too... As was the lightning port move, and original USB even... or devices with multi-touch touchscreen covering the entire front of the device.


In general the ATV4 is just underwhelming for the amount of time Apple had between ATV2/3 and ATV4 to make a real stunner. Instead, with the ATV4, we got something that would have been decently compelling in 2013 that is beaten handily in price and features in 2015.
Score: 7 Votes (Like | Disagree)

RickInHouston
Looks like the answer is in - too high a walled garden. That is unfixable.
Score: 6 Votes (Like | Disagree)
Read All Comments