In a press release, Apple says the update adds traditional Chinese instruments like the pipa and erhu, plus Chinese percussion offerings that include drums, wood blocks, cymbals, and gongs. 300 Apple-created Chinese musical loops have also been added to the apps. 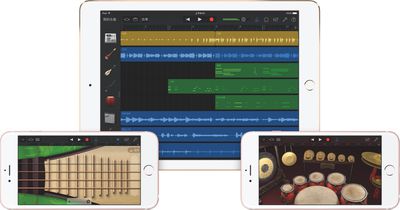 "GarageBand is the most popular music creation app in the world and we're excited to introduce these new features that incorporate the rich history of traditional Chinese music," said Susan Prescott, Apple's vice president of Product Marketing. "By adding classic Chinese instruments and new Live Loop templates, the new GarageBand app makes it fun and easy to make Chinese-inspired music right on your iPhone, iPad or Mac."

The new instruments are available on both the iOS and Mac versions of GarageBand, and each instrument includes different playing articulations like rapid picking and note bend for the pipa and trill, grace note, and glissando for the erhu.

Apple-created loops have been created from a wide variety of instruments and styles, including guzheng, dizi, yangqin and Peking Opera, which can be combined with the new instruments for a unique sound. GarageBand for iOS also includes two new Chinese templates for Live Loops and new sharing options for popular Chinese social networks.

Here's the incredibly talented @JJ_Lin on the erhu as we jam with the new GarageBand, out today. https://t.co/RHJZuahLHi #shotoniphone — Tim Cook (@tim_cook) May 17, 2016

Apple has been aiming to express its support for China in recent weeks following hints of regulatory trouble in the country. Apple is reportedly being targeted for being "too deeply established" in China's core industries and recently saw iTunes Movies and iBooks Stores in the country shut down following the Hong Kong iTunes release of the controversial independent movie Ten Years, which had been banned in China.

Apple recently announced a $1 billion investment in Chinese ride-sharing company Didi Chuxing, and this morning, he visited the country to meet with Didi Chuxing president Jean Liu. Cook also met with App Store developers at an Apple Store in Beijing.

GarageBand for iOS can be downloaded from the App Store for $4.99. [Direct Link]

GarageBand for Mac can be downloaded from the Mac App Store for $4.99. [Direct Link]

jdillings
Tim is really doubling down on getting that iTunes ban lifted. What's next? Adopting a Chinese orphan?
Score: 38 Votes (Like | Disagree)

theipodgod16
Oh boy. Can't wait to use these loops while I wear my new Apple Watch band. Innovation baby.
Score: 25 Votes (Like | Disagree)

Craig Federighi walks up on stage and presents.....Mac OSX Shanghai

Not sure what you tried to do there, but it comes across to me (my perception and understanding) as a bit racist.

You may want to take a look at the definition of racism, how is this racist? I Fail to see where this person is showing descrimination or prejudice against chinese people or feels one race is superior to another. Care to point that out?

Ridiculous that some people are trying to turn everything into racism.

The comment was actually against cook so are you saying he was racist against white people? Still no, he was talking about one person not a whole race.

Apple dropped 26% in china, cook is going to do everything he can to get it back and more.
Score: 16 Votes (Like | Disagree)

Not sure what you tried to do there, but it comes across to me (my perception and understanding) as a bit racist.

Reads as cynical humour, a mildly funny jab toward the man at the top... unless the Chinese are a race now? o_O
Score: 14 Votes (Like | Disagree)
Read All Comments