Immersion, a company that develops and licenses haptic touch feedback technology, today filed a second lawsuit against Apple and AT&T, accusing the MacBook and MacBook Pro of violating one patent and the iPhone 6s of violating three additional patents not mentioned in the original lawsuit. 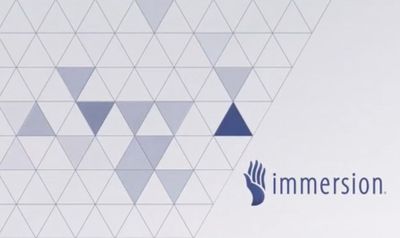 According to Immersion, iPhone 6s and MacBook features like 3D Touch and the Force Touch trackpad infringe on its intellectual property. The four patents included in today's lawsuit are as follows:

- U.S. Patent No. 8,749,507: "Systems and Methods for Adaptive Interpretation of Input from a Touch-Sensitive Input Device"

Apple's Force Touch trackpad utilizes haptic feedback to mimic the feeling of pressing on a physical button. The trackpad is able to distinguish between a light press and a harder press, with the pressure-sensitivity used to enable different gestures.

In the original lawsuit filed in February of 2016, Immersion accused Apple and AT&T of infringing on three patents with the iPhone 6, 6s, 6 Plus, 6s Plus, Apple Watch, Apple Watch Sport, and Apple Watch Edition. Immersion has added AT&T to the lawsuit because AT&T sells Apple products and offers guides, directions, and other materials that "encourage and facilitate infringing use by others."

Immersion's patent lawsuit, in which the company requests a jury trial and seeks compensatory damages, is accompanied by a second complaint with the U.S. International Trade Commission, seeking an inclusion order to prevent the sale of the accused Apple devices in the United States.

goobot
Lmao for the reason including att.
Score: 12 Votes (Like | Disagree)

Brad9893
Why are they suing AT&T? Every other major carrier in the US also sells the iPhone 6s. They should also be suing Verizon, T-Mobile, and Sprint with that logic! And hey, why not Best Buy and other retailers too while they are at it? It makes no sense to me, unless they are just trying for a money grab.
Score: 11 Votes (Like | Disagree)

A quick scan of their website reveals.....well very little....who buys their products?

This company have been around for years. Logitech used their technology back in the 1990s for a range of mice.

In late 2000s, Nokia licensed their technology for their phones.

Since the company is still alive, we can assume they've got customers today...

They certainly are not patent trolls... their technology is being actively used.
Score: 11 Votes (Like | Disagree)

apolloa
Good for you Immersion, go get em.

I do believe that Immersion INVENTED/ INNOVATED/ DEVELOPED/ BROUGHT TO MARKET the technologies it is suing for.

Here is the previous story highlighting how they actually make their stuff, they are NOT patent trolls as the Apple apologists will have you believe:

If companies want to use others technologies they need to pay to do so.
Score: 11 Votes (Like | Disagree)

Why are they just including AT&T? Every other major carrier in the US also sells the iPhone 6s.

I would guess that the reason is that the more lawsuits you have open at once, the more likely it is that you will lose one of them and set precedent that might cause you to lose the others.

Also Lawsuits are expensive especially against someone like Apple.

I can't wait for patent reform so these jerks will actually have to work for a living.
Score: 9 Votes (Like | Disagree)

A quick scan of their website reveals.....well very little....who buys their products?

Since their technologies are found in products from Logitech, Microsoft, Sony, Motorola, Google, Samsung, BMW, Audi, Volkswagen, Mercedes, Facebook (via Oculus Rift), medical device manufacturers, etc., I'd say hundreds of millions of people have bought and continue to buy their products.
Score: 9 Votes (Like | Disagree)
Read All Comments