Logging into the app previously required users to remember their login and mailbox password to access their inbox, but as of version 1.2.3 they can turn on the Touch ID feature to unlock encrypted email with their finger on opening the app. 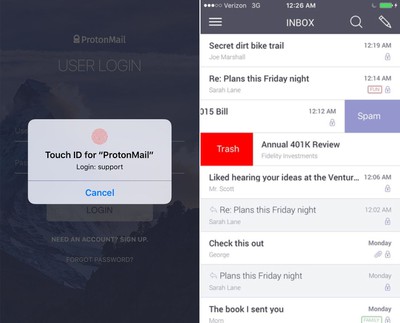 An optional second layer of security has also been included, requiring users to enter a PIN code instead of or as well as their fingerprint. A new automatic lock function also lets users set ProtonMail to auto-lock every time they come out of the app, or after a set amount of time.

Elsewhere, ProtonMail users can now add attachments from iCloud and other third-party storage apps directly to their messages, while an option to automatically show images in messages and password manager support for iOS have also been introduced. Paid ProtonMail Plus account holders additionally get mobile signature editing, with a number of bug fixes and smaller improvements also among the updates.

ProtonMail was launched in March by Swiss software developer and civil liberties outfit Proton Technologies. The service made waves in the security community as the first free end-to-end encrypted email service built on the back of a half a million dollar crowdfunding campaign.

ProtonMail invisibly integrates PGP encryption into a modern user interface and operates on the service's "zero access" policy, meaning all messages are stored in encrypted format so that not even ProtonMail has access to their contents.

ProtonMail is a free download for iPad and iPhone. [Direct Link]

KALLT
Unfortunate that they now append a mobile signature. I am still waiting for a way to pay with IAP.
Score: 1 Votes (Like | Disagree)
Read All Comments