Following an announcement earlier in the month, Apple today began selling the higher-end Apple Watch Hermès bands separately in its online store. Before today, the only way to get a band from the French lifestyle accessory brand was to buy an Apple Watch collection which included either the Single Tour, Double Tour, or Cuff bands, ranging between $1,100 and $1,500.

Now those who already have an Apple Watch can splurge on the Hermès bands, and choose from an array of new colors including sapphire blue, peacock blue, white and orange. The color options do vary by casing size and band design, however. For the $340 Single Tour bands, the 42mm size is offered in sapphire blue, deer brown, fire orange and black, while 38mm users have additional choices of white and peacock blue. 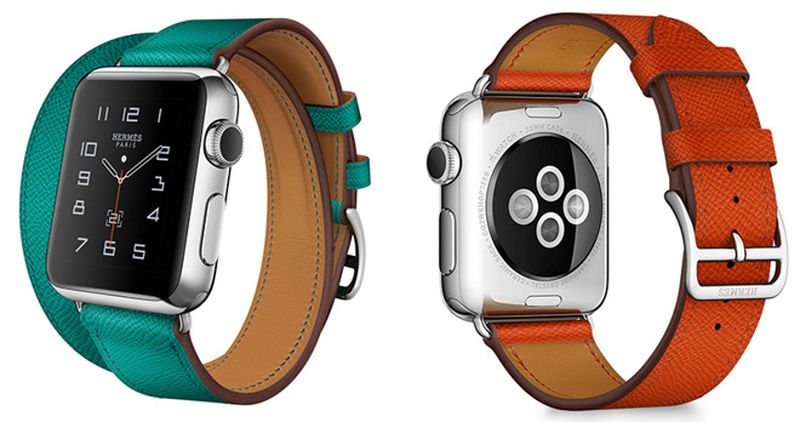 The $490 Double Tour option is aimed at smaller wrists and is available only in 38mm option, but in two regular and long strap lengths. The regular length will be available in white, peacock blue, sapphire blue, tin gray, deer brown and fire orange, while the longer length band comes in deer brown. The $690, 42mm-only Cuff band is still being sold in just the deer brown color option.

Apple has updated its Apple Watch band storefront to include the Hermès collection, but the new page has a few bugs and broken images and links, so users can't fully purchase the bands separately as of yet. Apple began selling the Apple Watch Hermès collections on its website in January, which was an online expansion of its previous exclusivity to select boutique retailers and Apple Store locations. Since the new bands are being sold separately from an Apple Watch, it also appears users who purchase a band only won't get the Hermès exclusive Apple Watch clock face.

You can find other pieces of leather for much cheaper for your $375 watch.

Or just stop complaining about the price of something you were never going to buy anyway.
Rating: 14 Votes

orbital~debris
Love that this option exists. These watch straps look beautiful. (The added bonus is you can safely ignore them if you're a whinger.)
Rating: 8 Votes

Jakexb
Hey fellow nerds, this band is not for us.

This is to make the Apple Watch fashionable and save it from being a nerd device only worn by people like us.
Rating: 6 Votes

keysofanxiety
I never contemplated that a watch band (made out of leather, of all things), could cost as much as a brand-new Mac. What a wonderous age we live in.
Rating: 5 Votes

Love that this option exists. These watch straps look beautiful. (The added bonus is you can safely ignore them if you're a whinger.)

Whinger is a fantastic word.

BarmyGnome
No thank you.
Rating: 4 Votes

aawil
I'd rather pay for the watch faces than the bands
Rating: 3 Votes

I never contemplated that a watch band (made out of leather, of all things), could cost as much as a brand-new Mac. What a wonderous age we live in.

They can cost much more than a brand new Mac, and have since the inception of the Mac.
Rating: 3 Votes
[ Read All Comments ]