As we reported in January, Apple plans to hold its annual Worldwide Developers Conference on June 13 to June 17 in San Francisco, at the Moscone West convention center where the conference has been held for the past several years.

The official WWDC dates have leaked courtesy of Siri (via 9to5Mac), who, when asked when WWDC will be held responds: "The Worldwide Developers Conference (WWDC) will be held June 13 to June 17 in San Francisco. I'm so excited!" 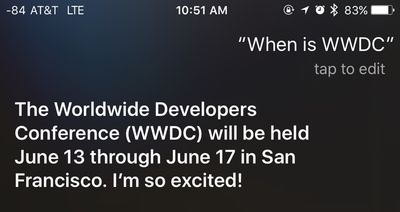 While today's information counts as official confirmation that the conference will be held from June 13 to June 17, the dates in question were already known based on scheduling information at Moscone West. Since January, the Moscone Center has been booked for the first, second, fourth, and fifth weeks of June, leaving only the third week open for Apple.

Given that Siri is providing information about the Worldwide Developers Conference, the ticket lottery for the event is imminent and could go live as soon as tomorrow. Due to the popularity of the event, Apple offers each $1,599 ticket to developers based on a lottery system.

Apple's annual Worldwide Developers Conference is of interest to developers because it gives them a chance to interface with Apple engineers and attend a wide variety of instructional websites to learn methods for improving their apps. For non-developers, the Worldwide Developers Conference provides a first look at new versions of iOS and OS X and is also often used as a venue for introducing new products and services.

So many things that could happen!

You guys know this is a DEVELOPER'S conference, right? If Macs are updated, it'll be a minor part of the show. It's primarily about iOS and OS X.

Despite the title Apple's announced:


Apple does a lot of product launches at WWDC, not sure where you've been.
Score: 13 Votes (Like | Disagree)

Peace
I want a new pony.
Score: 7 Votes (Like | Disagree)

nicovh
I hope they have some great news in store for the MacBook Pro line!

TimUSCA
You guys know this is a DEVELOPER'S conference, right? If Macs are updated, it'll be a minor part of the show. It's primarily about iOS and OS X.

Edit: I get it, guys. They've released hardware before. I'm just amazed at the overwhelming expectations of a complete overhaul of the entire lineup.