Tuesday January 19, 2016 11:09 am PST by Juli Clover
Each June, Apple holds its Worldwide Developers Conference at the Moscone West convention center in San Francisco, California, giving thousands of developers from around the world a chance to meet up with Apple engineers and sit in on valuable workshops and software sessions.

Apple has not yet announced the dates for its 2016 conference, but based on scheduling information available from the Moscone Center, it appears there's only one narrow window that's potentially available -- June 13 to June 17. 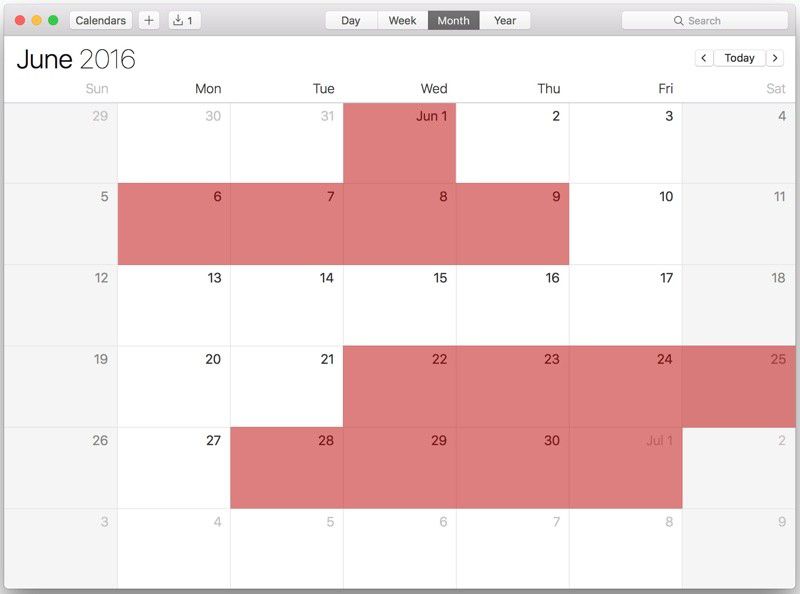 Dates in red are unavailable at Moscone West

During the first, second, fourth, and fifth weeks of June, Moscone West is booked for a Travel Association Luncheon, a Biotechnology Industry Organization conference, an International Society for Stem Cell Research convention, and the Red Hat Summit. There's nothing on the calendar for the third week of June, suggesting that's when Apple will use the facility.

Since 2007, Apple has held WWDC during the first few weeks of June, and the conference has always taken place at Moscone West due to the large number of attendees, so while there's no concrete information pointing towards Apple's WWDC plans, June 13 to 17 is a very solid guess based on past events.

At WWDC, Apple holds a keynote event on the first day to introduce new software and new products. In 2016, we could potentially see new Macs or other hardware, and we will get our first look at OS X 10.12 and iOS 10. Apple's 2015 event was software and service centric, focusing on iOS 9, OS X El Capitan, watchOS 2, and Apple Music.

As expected, Tim has no regard for hot temperatures and how exhausting airline travel is these days.
Might as well sit in his cushy office with his private jets.

Stop sticking it to those who make you money, Tim.

Why can't Tim figure out how to give tickets to everybody?
The Apple lottery is so flawed.

What about the diversity in assigning the tickets and stop rubbing your liberal viewpoints into our developer faces?

Hopefully #1 feature is to remove cobalt from all the batteries.

Go back to fixing your crapware and don't come up with new buggy stuff that
nobody wants. We do need more EMOJI!

Fix maps, it sends me endlessly around my block in my city in the wrong one way direction. Talk about Infinity Loop.

That guy doesn't deserve 1 penny and would be fired if he worked for me.

PS: What about the Mac Mini and bigger batteries?
Rating: 10 Votes

powertoold
Plot twist: the spaceship is finished by June and WWDC is the grand opening!
Rating: 8 Votes

So the bottom line is: when's the iPhone 7 coming? That's all I care about.

nepalisherpa
I cannot wait to hear what iOS 10 is going to give us.
Rating: 4 Votes

profets
So what does everyone think - after having iOS, tvOS, watchOS, do you think we'll see OS X renamed to macOS? Maybe even simplify the version numbers to drop the '10.' prefix? macOS 12.0?
Rating: 3 Votes


You got it off to a good start. Congrats.
Rating: 3 Votes

So the bottom line is: when's the iPhone 7 coming? That's all I care about.


Should be September, as that gives Apple enough time to release a beta version of iOS 10 that is labeled 10.0 and then improved upon dramatically throughout the next year.
Rating: 3 Votes

macnewbie91
Perhaps iOS X will ditch the app grid and allow for a more advanced looking operating system on the home screen.

ghost187
They must be very confident about the features they have in stock for iOS 10 if they are giving away some decent features with iOS 9.3 (f.lux, password protected notes, some decent additions to notes and health app, etc...).
Rating: 1 Votes