The first is the CalDigit T8, a Thunderbolt 3 RAID 0, 1, 5, 6, and JBOD storage solution with 8-bays offering capacities up to 48TB with 3.5” HDDs and 8TB with SSDs. The device's dual Thunderbolt 3 ports deliver up to 40Gb/s bandwidth, while dual USB-C ports work with Type-C computers like the 12-inch Retina MacBook. 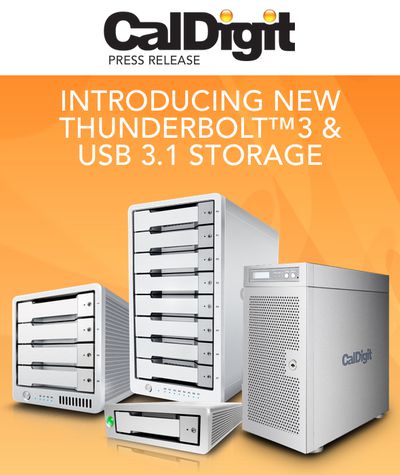 The new T8 features speeds of up to 1440MB/s with SSDs, two fans for cooling and a full-size DisplayPort connector on the back of the unit that enables users to connect a 4K monitor at 60Hz to the storage device. CalDigit has not released pricing for the T8 yet, but it will be available in late 2016.

Likewise, the CalDigit AV Pro 2 is a new single-drive storage solution featuring USB 3.1 Type-C for connectivity with the 12-inch Retina MacBook and other Type-C computers. The successor to the original AV Pro features capacities up to 6TB and 1TB with SSDs, and speeds of up to 200MB/s with 3.5” HDDs or 430MB/s with SSDs.

Meanwhile, the T4 RAID will be upgraded with Thunderbolt 3 later in 2016. Pricing for the AV Pro 2 and T4 RAID has not been announced.

Apple is widely expected to release its first Mac notebooks with Thunderbolt 3 later this year. Unlike Thunderbolt 2, the technology functions over a USB-C port, meaning that the next-generation Skylake-based MacBook Pro, and possibly the MacBook Air if not discontinued, should be equipped with both Thunderbolt 3 and USB-C.

It's doubtful the air will even exist the way Apple is going about things lately.
Score: 3 Votes (Like | Disagree)

Huh? As I understand it, RAID is intented to reduce the risk of sk of data loss.

There are lots of different RAID configurations (levels) ('https://en.wikipedia.org/wiki/RAID#Standard_levels') that offer different trade-offs between data safety, speed and cost (number of disks for a given capacity)

However, the focus of RAID was always on increasing performance - arguably, the levels with parity or mirroring do little more than compensate for the risk of adding more points of failure. There's also a huge hole (now pretty much accepted I think) in any calculations you do based on 'mean time between failures' stats that assumes all events are independent: drives of the same age, model - maybe even the same batch - running in the same environment on the same controller have a tendency to fail in clusters...

Certainly for most small-scale uses, a single SSD will perform far better than a small HD RAID setup, and a SSD RAID with mirroring or parity - needing 2-3 times the number of SSDs - will be a huge price to pay for data security that comes with a lot of loopholes. I'm sure any use cases for SSD RAID will quickly die out as PCIe or other fast interfaces take over from SATA and other interfaces designed for 'spinning rust'.
Score: 1 Votes (Like | Disagree)
Read All Comments