The Music Memos app, designed for musicians and songwriters, was introduced in January alongside a GarageBand for iOS update that brought the Live Loops feature. Live Loops is a new GarageBand interface that lets users create music by tapping on a grid-like arrangement to trigger different looped instruments and samples. 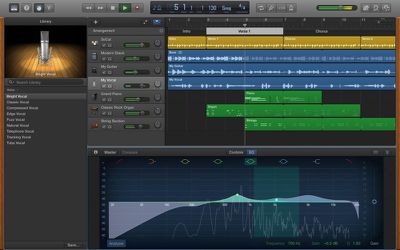 Along with these features, it adds more than 2,600 new Apple Loops and sounds to the app, adding more variety and options for song and music creation. There are also improvements to reliability when downloading content and enhancements to Accessibility.

In addition to GarageBand, Apple has also released a minor update for MainStage 3, designed to address overall stability and performance issues.

GarageBand can be downloaded from the App Store for $4.99. [Direct Link]

MainStage 3 can be downloaded from the App Store for $29.99. [Direct Link]

CmdrLaForge
To me this is some of the best news in a long time. I would really like if Apple focuses more in delivering fantastic software and not just fantastic hardware.
Score: 5 Votes (Like | Disagree)

just.in.time
It's good to see Apple giving some of their Mac software some love.
Score: 4 Votes (Like | Disagree)

garylapointe
"Let us loop you in"? https://www.macrumors.com/2016/03/21/live-coverage-iphone-se-ipad-pro-event/

ActionJacksonHern
Oh dang... This sounds like it's going to take up A TON of HDD space...
Score: 1 Votes (Like | Disagree)

MacBH928
Surprised Apple cares about their iLife suite. Back in 2003, this suite was mesmerising. You could do professional stuff on it, like having your own production studio.

I don't see people caring about it now like before. Either people are no longer in producing their own media, or there are $0.99 apps that replaces it.
Score: 1 Votes (Like | Disagree)