Apple today updated the Developer Center portal designed for developers an interface redesign for the account page that makes it easier to access all of the different developer resources.

The new account page, which features a clean look with quick access to Certificates, Identifiers, & Profiles, and iTunes Connect, replaces the previous "Member Center" for developers. Along with front-and-center buttons for frequently used tools, there's a left-side navigation bar that makes it easy to access resources like CloudKit, documentation, forums, and the bug reporter. 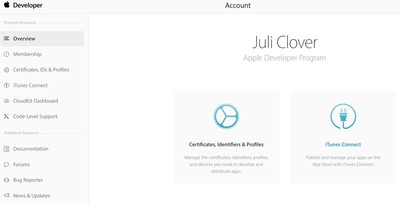 Aside from the new account page, the rest of the Developer Center is unchanged, but it's possible the updated look will be extended to additional pages in the future.

deathnite
Bug Reporter could really use a redesign.
Score: 5 Votes (Like | Disagree)

Bug Reporter could really use a redesign.

Its design being outdated is a perfect representation of how much attention to feedback you can expect on there.

I say: keep it!
Keeps expectations low → less disappointment when your tickets remain untouched for months.

nt5672
Haven't looked yet, but the last update went from marginally Ok to terrible. Functionality was hidden or removed in order to get a clean spacious look that made a terrible user interface design. Come on, we are developers and don't care so much for marketing bling, we need to be able to easily find the functionality we need. Hopefully, this is an improvement, but history does not give me a good feeling. Just to download Xcode beta took 100 clicks (maybe an exaggeration), but easily twice as many.
Score: 1 Votes (Like | Disagree)

When I read these news I get the feeling that over years people become dumber and dumber. Instead of reporting technological achivements and real news or significant rumors we are reporting such minor things.

And then it slowly drifts to something totally unrelated like:

If there're no real news today then it's better to not report anything. It just adds a huge amount of informational noise we are already swimming in and suffering everyday.

With all respect to Apple developers in particular, that's my general feeling over such news.

To be fair, you have gameboy in your signature so...
Score: 1 Votes (Like | Disagree)

BruceEBonus
Looking more long term, I think they'd be better off getting a refreshed Cook!
Score: 1 Votes (Like | Disagree)
Read All Comments