In March, Reddit released an updated version of its Alien Blue app for iOS, which included a free four-year Reddit Gold subscription gift for all Alien Blue users with Pro accounts. At the time, Alien Blue users were able to redeem the gift in the app, with Reddit promising to send the Reddit Gold credit at a later date.

As of today, Alien Blue users have begun receiving private messages informing them that their Reddit Gold subscriptions are activated, so all Redditors who used Alien Blue to redeem their free Gold subscription should be getting access to Gold features in the near future. 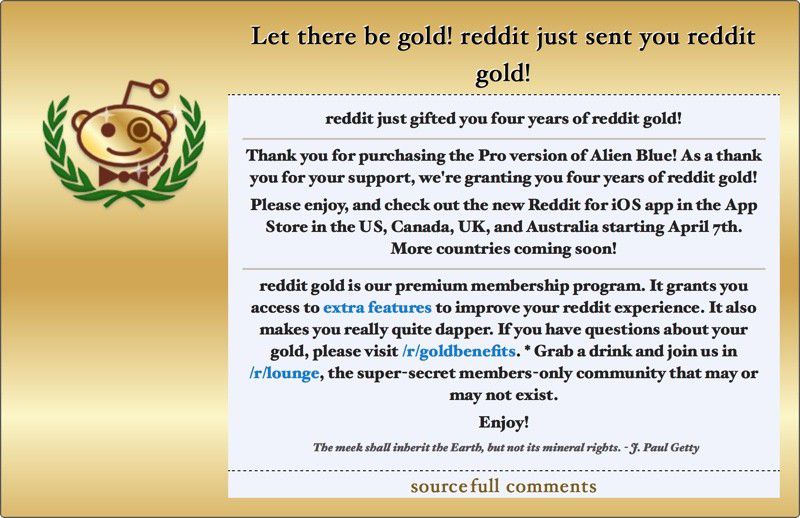 For those unfamiliar with Alien Blue, it is one of the most popular apps for browsing Reddit on iOS devices. It was purchased by Reddit in October of 2014 and while Reddit initially planned to improve the app with new features, the company ultimately decided to nix its plans for an update and go with a fully revamped Reddit app.

In the Reddit Gold message sent to Alien Blue subscribers, Reddit says that its new iOS app will launch on Thursday, April 7. Reddit hasn't shared many details on the new app, but it is believed that features included in the Pro version of Alien Blue for iOS will now require a Gold subscription to activate, hence the free Reddit Gold for those who previously owned the Pro version of the app.

Reddit has said that once its new iOS app launches, Alien Blue will be removed from the App Store. Customers who have already downloaded the app will be able to continue to use it, but the development team that worked on Alien Blue has moved on to the new Reddit iOS app.

AbSoluTc
This was a nice gesture. I have gold for 4 years now. I should buy a boat!
Score: 5 Votes (Like | Disagree)

Anyone know if there's any way to get this gift now? Like by buying a pro subscription?

You can no longer buy a pro subscription.
Score: 1 Votes (Like | Disagree)

Isn't reddit over? I thought it became the new digg last year.

Isn't reddit over? I thought it became the new digg last year.

That along with user-driven communities and their record of transparency will keep it alive for a while unless they choose to do something really stupid. Also, the ability to customize and refine subreddits is pretty damn good since they added CSS3 support.
Score: 1 Votes (Like | Disagree)
Read All Comments