Monday April 4, 2016 8:40 am PDT by Joe Rossignol
While it appears that Apple has elected not to share first weekend sales numbers for the iPhone SE, as it has done in the past for some flagship models, multiple analysts have forecasted that sales of the new 4-inch smartphone were "lackluster" during its first three to four days of availability.

In a research note issued today, KGI Securities analyst Ming-Chi Kuo questioned last week's CNBC report claiming that iPhone SE orders topped 3.4 million in China, and added that demand for the iPhone SE "has been significantly lower than that of past new models" since launching on March 31.

Lackluster iPhone SE demand supports our view. Although there exists a market survey that indicates iPhone SE preorders top 3.4mn units in China, we couldn’t find more evidence to support this. However, judging by the delivery time for iPhone SE preorders, we believe initial demand for the iPhone SE following the announcement has been significantly lower than that of past new models. We believe this is due in part to lackluster demand for smaller-size smartphones and, more importantly, that the product itself offers no significant upgrades to form factor or hardware specs.

Mobile analytics firm Localytics echoed Kuo, claiming that iPhone SE adoption was "lackluster" following the device's launch. According to the firm's research, the iPhone SE "managed to grab only 0.1% of the iPhone market" over its first weekend of sales, which marked lower adoption than the iPhone 5s and all of the "6" models. 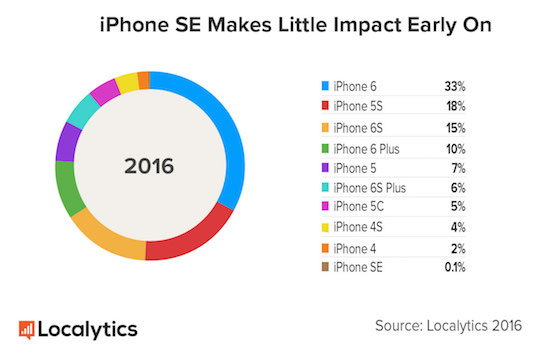 Apple launched the iPhone SE last Thursday on the same day as Tesla began accepting reservations for its lower-cost Model 3, and consumer excitement was unsurprisingly geared towards the highly-anticipated electric vehicle. In fact, many Tesla locations in the U.S. and Europe had longer lineups than nearby Apple retail stores.

Kuo forecasted that overall iPhone shipments will likely fall below 200 million units in 2016, indicating that the iPhone SE will not be enough for Apple to overcome "peak iPhone" until at least next year.

In light of market feedback for iPhone 6s, 6s Plus and SE, we believe growth on replacement demand for larger display is slowing. We are therefore conservative about shipments of current iPhone models in 1Q-3Q16.

Nevertheless, considering that the iPhone SE is effectively an upgraded iPhone 5s, and based on a design first introduced in 2012, it is largely unsurprising that demand among early adopters may be lower than usual. Apple's flagship iPhone 7 series is also due in September, which many customers are likely holding out for.

The success of the iPhone SE in emerging markets such as China, India, and Pakistan is likely what Apple is more concerned about. The smartphone's lower starting price should help get the device in the hands of consumers in markets where premium smartphones are out of reach for some due to socioeconomic factors.

In those markets, there is at least anecdotal evidence to suggest that the iPhone SE may be off to a good start.

asleep
SE was never going to be quick out of the gates,

But it'll catch up with steady sales over time.
Rating: 36 Votes

err404
Tesla must be to blame. Too many people choose to pre-order a car instead of a phone.
Rating: 34 Votes

Sirious
Where are all the people that wanted a new 4 inch iPhone?

Apple launched the iPhone SE last Thursday on the same day as Tesla began accepting reservations for its lower-cost Model 3 ('https://www.macrumors.com/2016/04/01/tesla-unveils-35000-model-3-electric-car/'), and consumer excitement was unsurprisingly geared towards the highly-anticipated electric vehicle.


Can we stop acting like the Tesla announcement stole any of Apple's thunder? They're two completely separate products and each got a fair amount of coverage in the news. Consumers are smart enough to hear about two new things on the same day and not fixate on one.
Rating: 20 Votes

talkybear
Apple didn't even try. They could have eliminated the bezel and made this a 4.3'' brand new phone.
Rating: 18 Votes

Where are all the people that wanted a new 4 inch iPhone?

Right here. I'm one of those people who wants a new 4-inch iPhone. And until one is released, I'll continue to use my iPhone 5s.
Rating: 17 Votes

BMcCoy
Umm.. not sure about other countries, but it's proving difficult to get hold of one in the UK.
Order online, it's a 2 week wait.
And no stock in stores at the moment.

I would be an SE customer, IF I could actually buy one!
Rating: 16 Votes

magicschoolbus
Would of done better if they changed the chassis up a bit.. while it may be all new inside, consumers will view it as old. The average consumer will recognize this device as being outdated as the iPhone 6 has a larger screen and new form factor. They should of made it look "new".
Rating: 12 Votes

jodymcd
Nobody's talking about the fact that this is the first phone released after AT&T stopped subsidizing them. Paying full price is a big deterrent.
Rating: 12 Votes