Despite its much-publicized problems, Apple's iOS 9.3 is showing a lower crash rate than all active iOS builds, an app analytics firm reported yesterday (via AppleInsider).

According to California-based Apteligent, over the past eight days iOS 9.3 has had a crash rate of only 2.2 percent, making it the most stable iOS release in circulation. Apple's new iOS also beat the latest version of Android, which had a reported crash rate of approximately 2.6 percent. 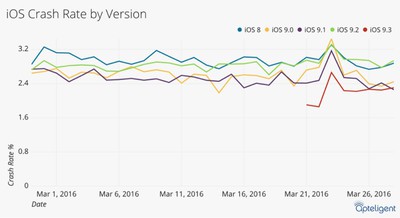 By contrast, iOS 8, iOS 9 and iOS 9.2 have all fared worse over the month of March, with crash rates of 3.2 percent meaning their users were more likely to experience problems than early adopters of Apple's latest mobile OS iteration.

The study will come as a surprise to many, following media coverage of issues reported by a number of iOS users. Apple is aware of an issue causing web links to crash in multiple iOS apps like Safari, Mail, and Messages, and says it is working on a fix that will be released "soon" via a software update.

The bug was the second major bug to affect iOS 9.3 users. The first rendered some older devices unusable due to a problem with Activation Lock, which required customers to enter the information originally used to set up their iPhone or iPad. Apple released a new version of iOS 9.3 on Monday to fix the issue.

Sirious
Thankfully, I think I'm one of the only people who hasn't had any problems with this release lol
Score: 19 Votes (Like | Disagree)

You get what you measure. Misbehaving feature or a non-severe bug may not crash anything, so according to the measures everything's fine, but at the same time the user is frustrated with yet another glitch.

My experience with 9.3 is excellent.
Score: 12 Votes (Like | Disagree)

pavelbure
I clicked the link on my phone, it didn't work.
Score: 11 Votes (Like | Disagree)

Roadstar
You get what you measure. Misbehaving feature or a non-severe bug may not crash anything, so according to the measures everything's fine, but at the same time the user is frustrated with yet another glitch.
Score: 11 Votes (Like | Disagree)

brinary001
It's interesting how a major company can just toss out a software update to millions of users and then cross their fingers in hopes everything works out. Makes me confident as a CS student that my job won't be as hard as I imagined XD

EDIT: Okay people it was a jooooooke. Obviously I understand the complex process of rolling out even a moderate update of a major OS to a wide audience. I love Apple, as you can probably tell by my Jony Ive avatar, and this was a bit of a rag on all major tech companies and the routine they go through for their updates.
Score: 9 Votes (Like | Disagree)

lionsy
Without trying to sound overly crazy, iOS rarely crashes anyway, I don't remember the last time I saw springboard reset or something.
Score: 7 Votes (Like | Disagree)
Read All Comments