Electronic Arts today announced a new game in the popular Plants vs. Zombies series, called Plants vs. Zombies Heroes, that ditches the tower defense mechanisms of past mobile installments for a collectible card format in the vein of Hearthstone (via VentureBeat). EA and PopCap Games aimed to make the game "accessible, with a lot of depth" to satisfy those new at card battling games but keep experts playing for a while.

The game introduces new "Super Hero" classes of plants and zombies that act as the franchise's version of the heroes from Hearthstone. Some of these include The Green Shadow, an elusive but powerful peashooter, and Impfinity, a Zombie Imp Hero with the ability to create multiple Imp clones during battle. They serve as the main character supporting the "rest of your team," or the deck you've built, and lead the charge in a multiplayer battle against another Super Hero.

In the game, you need sun energy to make moves on the plants side. When you play a card, an enemy can attack. You always get a chance to attack back. To win he game, you have to defeat the enemy Hero and defend your own. You can buff your units to make them stronger. Some units can only be played in water or roof lanes. Once you reach a certain level, you can start playing as zombies. Zombies have their own advantages, like hiding played characters under gravestones so you can’t see their capabilities.

Other than multiplayer, users will be able to travel through a single player adventure, compete in tournaments, lower the pressure in casual mode, and even see familiar faces of the franchise. Most notably, the new mobile game appears to directly reference the recently released Plants vs. Zombies: Garden Warfare 2, which is the franchise's version of a third-person shooter that launched on consoles in February.

Plants vs. Zombies Heroes will have over 300 unique characters with unique animations, which EA hopes will help the game become more accessible to a larger group of people. For that same reason, it'll keep games to short 10-15 minute runs and leave "about a third of the characters" as easily unlockable options, "but you may have to dish out real money to buy character packs to get more characters."


So little is officially nailed down about the game because today's announcement precedes a soft launch for Plants vs. Zombies Heroes in New Zealand, with a planned worldwide launch "soon." EA is no doubt testing the waters for the possibility of micro-transactions and game balancing before a bigger release.

Brian Lindley, senior producer at EA, knows the company's new game falls closely in the category that Hearthstone has helped legitimize, noting that “Hearthstone is both inspiration and competition. They took the genre in a good direction.” Blizzard's card game makes it easy to opt-out of paying for most of its in-app purchases and still have fun with the game, so hopefully EA keeps that in mind for any potential micro-transactions in its own card battler.

For anyone interested in playing Plants vs. Zombies Heroes ahead of the wide release, our sister site Touch Arcade has a how-to guide listing the steps to download soft-launch games like this one outside of the debut territory.

Chupa Chupa
This will make it more accessible? Did anyone find the original game to hard to comprehend? OK I'm bitter b/c they ruined PvZ 2 by making it pay-per-plant. Then again EA ruined all there games in a similar manner. Waiting for the version of Wheel of Fortune where you literally have to buy a vowel.
Score: 7 Votes (Like | Disagree)

News flash: EA Announces it's milking everything it can out of its mediocre games. Next up, plants VS zombies energy drink for kids!! 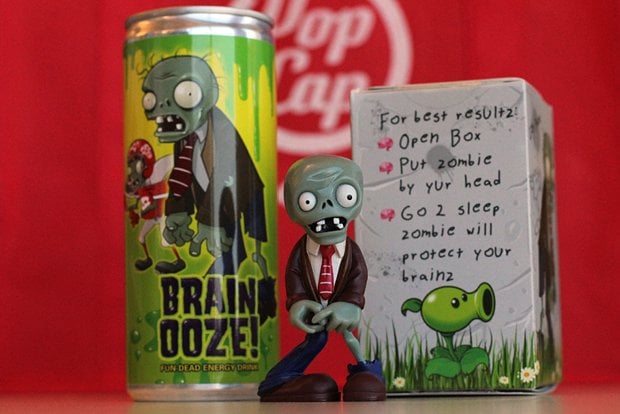 iLoveDeveloping
News flash: EA Announces it's milking everything it can out of its mediocre games. Next up, plants VS zombies energy drink for kids!!
Score: 6 Votes (Like | Disagree)

YouCanCallMeBigDaddy
Did they pay you guys to put this article on here? I'm not seeing how this is any kind of "Quality Content".
Score: 4 Votes (Like | Disagree)

Did they pay you guys to put this article on here? I'm not seeing how this is any kind of "Quality Content".

I thought the exact same thing. At most a side story
Score: 2 Votes (Like | Disagree)

I thought the exact same thing. At most a side story

We just thought it was a neat little tidbit. Plants vs. Zombies has a long history as a popular franchise, and combining it with the massively popular card-collecting genre is an interesting twist. ¯\_(ツ)_/¯
Score: 2 Votes (Like | Disagree)
Read All Comments