The man who inspired Steve Jobs to bring multiple typographic styles to the Mac, the Trappist monk and calligrapher Rev. Robert Palladino, died late last month at the age of 83.

Palladino taught calligraphy classes at Portland's Reed College, which Jobs attended during his dropout year. Yesterday The Washington Post published a retrospective highlighting the development of Palladino's art, the encounter between the two men, and the continuing influence Palladino's calligraphy had on Jobs' aesthetic vision. 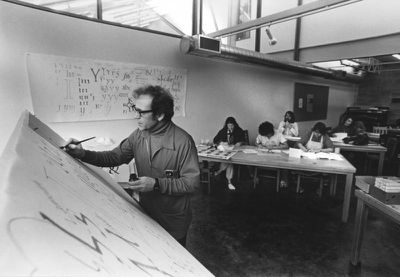 Robert Palladino teaching in 1978 (Image: Reed College)
Palladino's creative journey began in 1950 when he joined a New Mexico monastery at the age of 17. A scribe monk in the Trappist order noticed Palladino's elegant handwriting, and tutored him in the art of decorative lettering over the course of five years.

Eventually, Palladino left New Mexico and moved to Lafayette, Oregon, where his art caught the attention of Lloyd Reynolds, an expert calligraphist and the creator of the calligraphy program at Portland's Reed College.

After striking up a friendship with Reynolds through written correspondence, Palladino left the silent monastic life in 1968 to study under his new mentor full-time, before Reynolds retired a year later and left Reed College's program in Palladino's hands.

Steve Jobs enrolled in the college in 1972, but dropped out after his first semester. However, the future Apple co-founder continued to frequent the campus and Palladino's work soon caught his eye. Jobs recounted his appreciation for the handwritten art in his 2005 commencement address at Stanford:

Throughout the campus every poster, every label on every drawer, was beautifully hand calligraphed. Because I had dropped out and didn’t have to take the normal classes, I decided to take a calligraphy class to learn how to do this. I learned about serif and sans serif typefaces, about varying the amount of space between different letter combinations, about what makes great typography great. It was beautiful, historical, artistically subtle in a way that science can’t capture, and I found it fascinating.

None of this had even a hope of any practical application in my life. But 10 years later, when we were designing the first Macintosh computer, it all came back to me. And we designed it all into the Mac. It was the first computer with beautiful typography. If I had never dropped in on that single course in college, the Mac would have never had multiple typefaces or proportionally spaced fonts.

"He came back afterwards and consulted me about Greek letters for a type font," Palladino later recalled for a Reed College 2008 oral history project. "I don’t know if he ever used my Greek letters, or if he just used them as a starting point, but we had a good time. He was educating me about what a computer is, as I hadn’t the foggiest idea what he was talking about."

Palladino never owned, or even once used, a computer, but recalled Jobs as being "as nice a guy as you could meet," in a 2011 Hollywood Reporter interview. He also taught other famous students, including typeface designer Sumner Stone, who created the ITC Stone font during his time at Adobe.

Robert Palladino in his home studio in Sandy, Oregon, in 2012 (Image: Liz Devine)
Palladino taught until 1984 before retiring with his wife to a 20-acre farm, where they raised sheep. He became a Catholic priest in 1995, but worked as a professional calligrapher until his death on February 26.

You can watch Palladino interviewed for the 2011 PBS documentary Steve Jobs: One Last Thing, in a segment covering the artistic influences that shaped Jobs' character.

2457282
I was not aware of this man and his history. I just read the bio from Reed college and he seemed like an amazing person. And most amazing is that in this day and age, he never once owned or used a computer. This takes OLD SCHOOL to another level.
Score: 5 Votes (Like | Disagree)

And in other news the Producer of The Battles also passed away. Interesting facts in the news about how he influenced their sounds, came up with clever ideas for their tracks.

I assume you mean the Beatles?
Score: 3 Votes (Like | Disagree)

Interesting that he was a trappist monk, to me it is synonymous with greatness. In my opinion, and in many others’ shared opinions, some of the best beers in the world are made in trappist monasteries. If you drink beer and find this, I highly recommend trying it. 10/10

Agreed, to a degree. I've visited Belgium several times, but favor other beers in their history - I do favor and recall drinking fruit-based Lambics in Oudenaarde and Bruges, Belgium (so much better fresh than what we get in the bottle here!). The Abbey that Mr. Pallidino belonged to, the Our Lady of Guadalupe Trappist Abbey, was invested in timber, wine, bindery, breads, and fruitcake(?) - but not beer (odd, being so close to Portland). I'd been by Reed College and Sandy so many times over the past 30 years - I studied typography in the late 80s during my technical writing degree program and just loved Palladino's work.

apolloa
And in other news the Producer of The Beatles also passed away. Interesting facts in the news about how he influenced their sounds, came up with clever ideas for their tracks.
Score: 1 Votes (Like | Disagree)

And most amazing is that in this day and age, he never once owned or used a computer. This takes OLD SCHOOL to another level.

To think he designed and did this by hand. I look at my handwriting and just cringe. His calligraphy is truly an art form.
Score: 1 Votes (Like | Disagree)

Jess13
Interesting that he was a trappist monk, to me it is synonymous with greatness. In my opinion, and in many others’ shared opinions, some of the best beers in the world are made in trappist monasteries. If you drink beer and find this, I highly recommend trying it. 10/10

Monday May 23, 2022 10:58 am PDT by Juli Clover
Apple is one of several companies that have held talks with Electronic Arts (EA) about a potential purchase, according to a new report from Puck. EA has spoken to several "potential suitors," including Apple, Amazon, and Disney as it looks for a merger arrangement. Apple and the other companies declined to comment, and the status of the talks is not known at this time, but Apple does have an ...
Read Full Article • 171 comments