Amid rumors a dual-lens camera will be introduced in the iPhone 7, Apple recently submitted a patent application published in January which gives us rare insight into what Apple thinks a dual-lens camera interface could look like on future iOS devices.

The patent outlines a dual-camera system that consists of one standard wide-angle lens similar to what's in the iPhone today and a second telephoto lens capable of capturing zoomed-in video and photos. 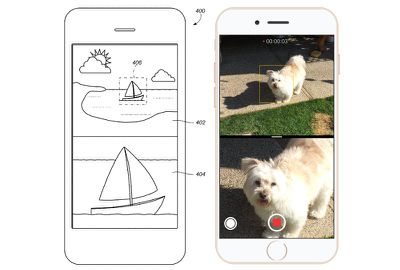 Both lenses can be used simultaneously to take separate photos or videos, with Apple's software able to merge the images together in unique ways. As described by Apple, images from both lenses can be displayed on the same screen in the Camera app through a split-screen view that shows a standard wide-angle image on one side and the zoomed image on the other side.

When capturing a video or a photo, users are able to transition between both lenses seamlessly, tapping on a spot in the photo to zoom in with a second lens. Apple's system would work similarly to digital zoom does today, but because it's using a lens with a longer focal length instead of zooming in through software, there's no loss of detail and the zoomed in image is much more crisp and clear.

Using the information obtained from the patent as a guideline, MacRumors videographer Matt Gonzalez created this video depicting how Apple might utilize multiple cameras to add impressive new features to the iPhone's picture taking capabilities.

Subscribe to the MacRumors YouTube channel for more videos.
As a specific example in the patent, Apple outlines a photo-taking opportunity at a child's birthday party. A parent could capture a video of the moments before the candles on the cake are blown out using the standard wide-angle iPhone camera, and then tap on the screen to open a split-screen view and activate the telephoto lens for a close-up portrait shot of the exact moment the candles are blown out.

According to the patent, both cameras are able to be used separately, with each one capturing video (even slo-mo video) or one capturing video and another taking photographs. The resulting files can be saved independently or artfully merged together using Apple's software.

We can't be sure that the patent is representative of an actual dual-camera implementation we might see in a future iPhone, but it's certainly a possibility and it gives us a solid look at some of the ideas Apple is working on. We're still several months away from the iPhone 7 and the iPhone 7 Plus, but multiple rumors suggest a dual-lens camera will be a feature for the larger-screened device.

ghost187
Please Apple don't force me to buy a phablet brick to have this feature!
Score: 16 Votes (Like | Disagree)

"Hey iPhone users. Ever take a 1 second video by accident bc you though you were in photo mode...? Well, now we've turned that happy accident into a thing! Introducing Live Photos...
Score: 10 Votes (Like | Disagree)

cariacou
can't wait for all these cat videos to be dual camera
Score: 8 Votes (Like | Disagree)

Bubba Satori
Can't wait for a wide angle shot that can get all of Dim Kartrashian's trunk in the frame.
Score: 5 Votes (Like | Disagree)

Oblivious.Robot
I'm going to miss this feature on my supposedly-puny-non pro iPhone 7. :(
Score: 4 Votes (Like | Disagree)
Read All Comments