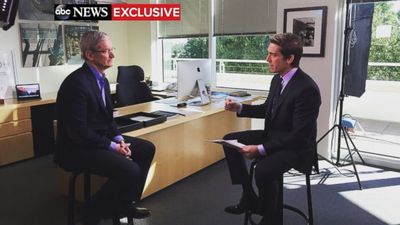 In the interview, Cook will outline the reasons why Apple is objecting to the court order that would require it to help the FBI break into the iPhone owned by Syed Farook, one of the shooters in the December attack in San Bernardino, California.


Over the past two weeks, Apple and the United States government have been embroiled in a monumental dispute over privacy and encryption, stemming from the FBI's request that Apple develop new software to help it hack the passcode on Farook's iPhone 5c. Apple has refused to do so, saying the request sets a "dangerous precedent" that could lead to an overall weakening of encryption policies that endangers the privacy of tens of millions of American citizens.

Opposing this order is not something we take lightly. We feel we must speak up in the face of what we see as an overreach by the U.S. government.

We are challenging the FBI's demands with the deepest respect for American democracy and a love of our country. We believe it would be in the best interest of everyone to step back and consider the implications.

Since the request was made public, Apple and the FBI have engaged in a very public sparring match. The FBI called Apple's refusal a "marketing strategy," while Apple shared details on an Apple ID password change that may have prevented the FBI from obtaining the desired information through an iCloud backup.

The interview will air on World News Tonight at 6:30 Eastern Time. Shortly after, the full show will be available on ABCNews.com.

JonneyGee
Polls are already demonstrating public support for Apple over the FBI. I hope this helps send a strong message to the Feds that we won't stand for their invasive requests. Keep fighting, Tim!
Score: 20 Votes (Like | Disagree)

CaTOAGU
This is the kind of captain of industry we need running for president, not Donald Trump.
Score: 16 Votes (Like | Disagree)

JohnApples
"Omg! That's an unreleased 15inch MacBook in the background!"

Think about it - it's the FBI that has chosen the battleground for this issue. They've chosen the least sympathetic suspect possible. And whaddya know, after the precedent is set for this case, they've literally got a dozen other cases waiting in the wings. Look at how the FBI goes on about "think about the victims' families". I do believe the feds genuinely care about safety, justice, and stopping ISIS. But I also believe they're capable of simultaneously playing their best emotional, PR hand in obtaining these powers.

Why in the world would this be marketing by Apple?

This is a battle for public perception as well as a legal one. Once this precedent is set, there's no going back for Apple. I don't blame them one bit for raising the red flag publicly to let us all know about what's going on so we can discuss this as a society.

It's all just a ploy by the FBI and other law enforcement to play on people's emotions and fears to try to get them to give up their rights. We saw this same ******** after 9/11 and we ended up with the Patriot Act, PRISM, etc.

It's time for the people to stand up to these law enforcement's tactics and stand up for real American ideals of freedom.

We have loads of shootings every year yet nobody would ever give up their 2nd amendment rights. Why do people willingly want to give up their rights to privacy because of a half dozen incidents over the last 2 decades? It's unfathomable how foolish that is.
Score: 10 Votes (Like | Disagree)
Read All Comments

Friday November 25, 2022 2:58 am PST by Sami Fathi
An Apple engineer has addressed the lack of lossless audio support in the second-generation AirPods Pro in a new interview. Current Bluetooth technology in the AirPods lineup means that Apple's audio products do not support Apple Music Lossless audio. Apple has previously hinted that it may develop its own codec and connectivity standard that builds on AirPlay and supports higher quality...
Read Full Article • 197 comments