StarTech's latest Dual-Monitor Docking Station debuted in December, with a feature that sets it apart from other docking stations: dual DisplayPort 1.2 connections. 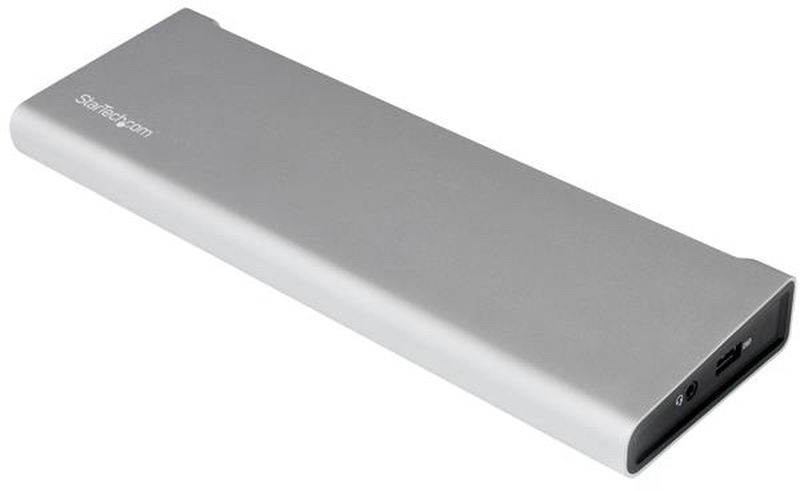 The Docking Station has a Falcon Ridge quad-channel Thunderbolt 2 controller for 20GB/s data transfer speeds. It can power two 2560 x 1600 displays through its DisplayPort connections, allowing for a dual-monitor setup that doesn't require a Thunderbolt-equipped display. It can also power a single 4K display (DisplayPort or Thunderbolt) or a DisplayPort display alongside a Thunderbolt display with a 4K resolution on the DisplayPort monitor. 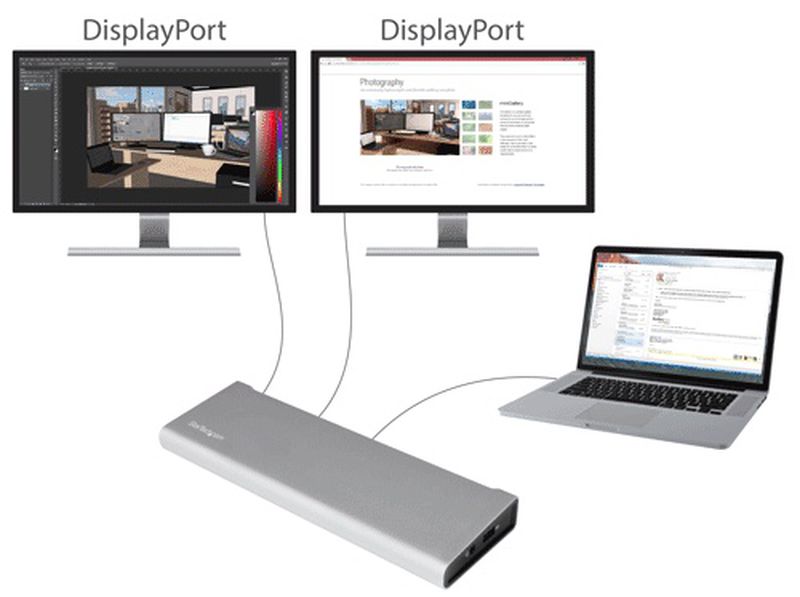 This Thunderbolt 2 dock lets you connect two displays to your laptop using common DisplayPort monitors. Traditional Thunderbolt docks require that at least one of your monitors is a Thunderbolt display for dual video, which means you might need to spend extra time and money on the additional display. Because it offers two DisplayPort connections, the dock makes it easy to create a highly productive dual-video workstation, with no additional costs or inconveniences.

Along with two DisplayPorts, there are two Thunderbolt 2 connections, a Gigabit Ethernet port, and four USB 3.0 ports (one of which is Battery Charging Specification 1.2 compliant for charging devices when not connected to a laptop). It supports 5.1 digital optical audio output, line input, and includes a 3.5mm headphone jack, plus an eSATA port for connecting external storage devices. Up to 12 peripherals can be connected at one time and Thunderbolt daisy chaining is supported.

The Dual-Monitor Docking Station can be purchased from StarTech for $347.99, but it's also available from Newegg at the much lower price of $290.

brownpaw
I don't consider myself a super cheapie or anything but the prices of these Thunderbolt docks is outrageous. Where's the ~$100 model with HDMI, gigabit ethernet, and a few extra USB 3.0? Not a huge power user with eighteen displays; don't care about Thunderbolt passthrough (MBP has 2xThunderbolt), but would still like an all-in-one solution with the other stuff for a reasonable price. Anything? Cheapest "dock" I can find is the StarTech dongle ('http://www.newegg.com/Product/Product.aspx?Item=9SIA24G2KG2051') with 1xUSB and 1xEthernet (no HDMI). Yes I know I can just use a separate cable for HDMI but that defeats the purpose of a single cable for the dock.
Rating: 6 Votes

Best bet: Hold off for Thunderbolt 3 / USB-C, when the ports are the same, and get a new Mac then.
Rating: 2 Votes

HiVolt
These thunderbolt docks are way too much for what you get.

Why is it still so damn expensive? TB was released on 2011 Macs, wasn't it? 5 years isn't enough for the prices to come down?
Rating: 2 Votes

mbezzo
I got one to test with at work and I'm unable to get the Dell 5k display to work at 5k with it. Still trying things but not sure it will be possible. Anybody else try this with a 5k monitor?
Rating: 1 Votes

Quu
I've wanted to pick one of these up but the docks just cost too much money. It's not that I'm adverse to spending the money for a quality product but these prices for such little functionality is silly.

I'd rather plug in two cables to power two external displays than spend $300 to plug one cable in. Thunderbolt IC's need to come way down in price.
Rating: 1 Votes
[ Read All Comments ]