Thursday February 18, 2016 7:39 am PST by Joe Rossignol
The latest numbers from research firm Gartner reveal that the smartphone industry continues to be largely a two-horse race between iOS and Android. The two mobile operating systems combined for 98.4 percent worldwide market share in the fourth calendar quarter of 2015, compared to 96.4 percent in the year-ago quarter. 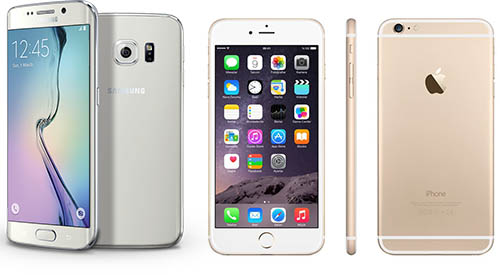 Windows Phone and BlackBerry smartphones accounted for just 1.1 percent and 0.2 percent market share respectively during the three-month period ending December. The results are largely unsurprising, as Microsoft is scaling back its Windows Phone efforts and BlackBerry released its first Android smartphone last year.

Apple and Samsung shipped a collective 551.2 million smartphones in 2015, trailed by Huawei, Lenovo-Motorola, and Xiaomi with 107.1 million, 73.9 million, and 72 million shipments respectively, according to recent Strategy Analytics data. Global smartphone shipments totaled a record 1.44 billion in 2015.

Windows Phone was perhaps the closest platform to being a true third place competitor, but its market share has dwindled as iOS and Android continue to grow. Samsung and Mozilla also have Linux-based mobile operating systems in Tizen and Firefox OS respectively, but adoption of each platform is comparatively slim.

gpat
Android = most volume.
iOS = most profit.
That's it. People shouldn't flame over it.
Rating: 8 Votes

APlotdevice
Microsoft might not be in such dire straits if they hadn't screwed over their existing mobile customer base. Repeatedly.
Rating: 7 Votes

So, what you're saying is that I should buy blackberry stock now because there is only one way to go..... up.

The only way for them to go now is bankrupt.
Rating: 7 Votes

Not sure what those entities have to do with this thread.

You said consumers should care about profits, and I'm guessing when your electric bill, gas bill, cell bill, interest rate etc goes up, you aren't cheering the companies on because they are making a good profit.
Rating: 6 Votes

Interesting language in the title.

Really, it should read something like "Apple secures just 17.7% of market, down from 20.4%" or "Apple's smartphone market share declines to 17.7%". But by lumping Apple in with Android, MacRumors are trying to make it all sound positive for Apple.

But when we talk about iOS, it's important to talk about the market share that everyone else has, and the fact that iOS + Android make up 98% of the market, even though nearly identical statements could be said about OS X and Windows.
[doublepost=1455811689][/doublepost]
That's because Microsoft has thrown in the towel. They're now putting their services on Android and iOS devices.

Although I feel that the move was premature. I feel like they could really use laptops running Windows 10 to sell Surface products, which could then be used to sell Windows 10 Phones.


My view is that Microsoft really screwed up and had a great chance to come up with a third alternative system that would have had great leverage in taking advantage of Windows 10. Instead, they are short sighted and only playing with others.
Rating: 5 Votes

"Well established fact?" Show me then. You are in absolute denial if you think iOS profits more than Android.

You said consumers should care about profits, and I'm guessing when your electric bill, gas bill, cell bill, interest rate etc goes up, you aren't cheering the companies on because they are making a good profit.

I am always amazed at apple fans bragging about profits. Do they really celebrate being overcharged? Do they really understand the correlation between the two?
Rating: 5 Votes

Consumers don't only consider the profit a company makes when choosing a phone. There's a whole load of other criteria besides that.

This consumer would rather have the company make a smaller profit if it meant I could pay less. :D
Rating: 5 Votes

Their OS is decidedly different and original in look and feel from the other 2.
Rating: 5 Votes