tvOS betas are more difficult to install than beta updates for iOS and OS X. Installing the tvOS beta requires the Apple TV to be connected to a computer with a USB-C to USB-A cable, with the software downloaded and installed via iTunes or Apple Configurator. Those who have already installed the second tvOS 9.2 beta will be able to download the third update over the air.

Subscribe to the MacRumors YouTube channel for more videos.
tvOS 9.2 is a significant update for the tvOS operating system. It brings support for Bluetooth keyboards, allowing a keyboard to be paired to the Apple TV for text entry. Bluetooth keyboard support is a major feature that was missing from previous versions of tvOS and its addition should make it much easier to do tasks like entering passwords on the fourth-generation Apple TV.

Along with Bluetooth keyboard support, the tvOS 9.2 update introduces support for grouping apps into folders on the Home screen like on iOS devices, plus it includes a new look for the App Switcher interface and it brings support for iCloud Photo Library and Live Photos. 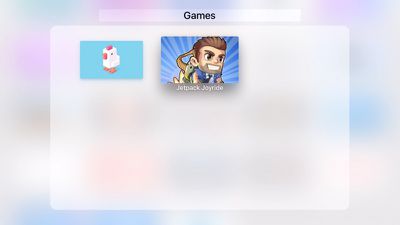 We'll update this post with any new features that are discovered in the third beta of tvOS 9.2.

Dictation - There's now support for onscreen text entry via dictation in countries where Siri is available. When updating to tvOS 9.2 beta 3, users will be prompted to enable or disable dictation. With dictation, Apple TV users can dictate text and spell user names and passwords rather than typing them.

With dictation enabled, the tvOS search bar alternates between a blank search field and an option to hold the Siri button to dictate text.

While speaking, a live levels meter is then displayed on the screen.

App Store Siri Search - Siri is now able to search for App Store apps, improving the app discovery process in the App Store. It's now possible to ask Siri to search for an app or to search for a category of apps, such as games and bring up a listing.

There is an app(s) for that

These are not at all what I'm asking for.

If I purchase iTunes season passes to two new shows, add House of Cards to my list on Netflix, add Comedians In Cars Getting Coffee to my watch list in the Crackle app, and my wife adds a show to her list in the HGTV app....there should be a central feed of those somewhere in the main UI. The great thing about a DVR list is that it is easy to see what's available, click, and away you go. Checking 7 different apps for updated content is not a good experience.
Score: 5 Votes (Like | Disagree)

The news about Bluetooth being added is complete ********. When I bought the unit, I called Apple to ask why I can't pair my Bluetooth keyboard with it and was told it only supports

Bluetooth 4 (which doesn't even exist!)

A total line of ******** from Apple yet again so they can push their crap out to market before it is merchantable. All for more money. Put out crap, lie to customers' faces, and hope no one notices.
a bunch of ******s.

I don't follow. They never advertised tv 4 to have Bluetooth keyboard support, so you bought a product based on an expectation that you didn't verify. Now they're adding it as a free update a few months later, and that's somehow not good either?
Score: 4 Votes (Like | Disagree)

jeffreyropp
How on earth was dictation not part of the original release? Its absence made the product look not ready.
Score: 2 Votes (Like | Disagree)

MikhailT
Is Apple actually encouraging people to voice out their passwords that will be sent to Apple's server to decode into readable text?

If that's true, that has to be the dumbest thing that Apple have done. Dictation should be automatically turned off for all password fields.
Score: 2 Votes (Like | Disagree)

Keyboard support is a good addition, but not innovation and should have been there with the new ATV4 at the start.

I have been using my PS3 / PS4 with a bluetooth keyboard since 2011... It is still easier to navigate Netflix etc, with a PS3/4 controller than the current ATV4 controller in any case.

Can you provide a link to the streaming device you developed that is so much better than than ATV? Since you obviously know exactly what it takes to release the perfect device on version 1.

The ATV4 was a great device when it was released, as is obvious by the sales that it garnered. It continues to get better with every software release, and as developers release apps.

Like many, I would much rather have the device with all of the great features it included at release, and wait for the less important ones like bluetooth keyboard entry until they're ready to release them correctly than to have to wait until they had it perfect in your eyes. Personally I would much rather type with my voice than hunt around for a bluetooth keyboard in those rare instances that I might want to type something.

Sounds to me that you are completely happy with your PS console(s) and good for you.
Score: 2 Votes (Like | Disagree)

this opens up the possibility for adding iMessage and facekbook apps on the apple tv.
Score: 2 Votes (Like | Disagree)
Read All Comments