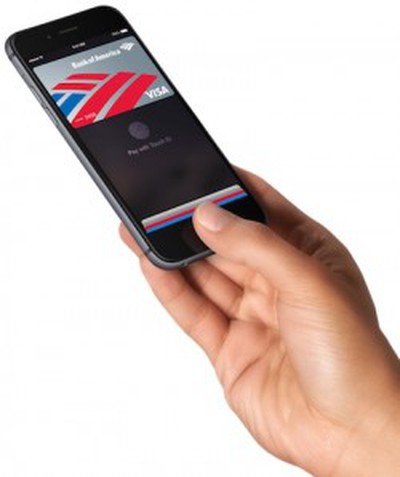 Bank of America and Wells Fargo are working on implementing Apple Pay into their ATMs, reports TechCrunch, citing a source with knowledge of the project. Both companies are said to have engineers working on the technology that would likely allow Apple Pay to be used at an ATM in place of a physical debit card.

When questioned about the possibility of Apple Pay at ATMs, Wells Fargo head of ATMs Jonathan Velline suggested the information was accurate and that Wells Fargo was working on adding support for mobile wallets that would meet all of its customers needs.

Wells Fargo's head of ATMs Jonathan Velline implied Apple Pay would come to its ATMs. He confirmed that "We've been working on the technology that allows us to hook to digital wallets, leveraging NFC on mobile phones to replace the card at the transaction at the ATM. Right now the wallet that we support is Android Pay." [...]
"But we're also looking at lots of different mobile wallets and evaluating which ones are going to be appropriate for our customers. We'll likely add more mobile wallets throughout the year."

Bank of America was less forthcoming about its plans, but told TechCrunch the company is developing a cardless ATM solution that would let customers use NFC technology on their smartphones to authenticate and complete transactions at Bank of America ATMs. The company would not confirm which phones it will work with.

Bank of America plans to begin rolling out its cardless ATM solution starting in late February at ATMs in Silicon Valley, San Francisco, Charlotte, New York, and Boston before a wider rollout set to take place in mid-2016. Wells Fargo did not provide information on when it plans to implement its NFC-based card replacement feature.

Apple Pay at ATMs would be a big win for Apple, given their prevalence across the United States. Wells Fargo has more than 12,800 ATMs, while Bank of America has more than 16,000.

JonneyGee
This would be amazing. I'm a BoA user and the only time I need my debit card is at an ATM since I use my credit card for everything else. We're still several stores shy of me being able to quit carrying my credit card, but at least this would thin my wallet out a little bit!
[doublepost=1454018786][/doublepost]

Sounds great, until the first time it accidentally cleans out someone's bank account. That would be a lot more upsetting than a double-charge glitch.

How would this even be of concern? Apple Pay would be used for validation instead of an ATM card and the rest of the process would be the same. You're just as likely to do that swiping a card as you would be with Apple Pay.
Score: 15 Votes (Like | Disagree)

This would be amazing. I'm a BoA user and the only time I need my debit card is at an ATM since I use my credit card for everything else. We're still several stores shy of me being able to quit carrying my credit card, but at least this would thin my wallet out a little bit!
[doublepost=1454018786][/doublepost]
How would this even be of concern? Apple Pay would be used for validation instead of an ATM card and the rest of the process would be the same. You're just as likely to do that swiping a card as you would be with Apple Pay.

You are right, it wouldn't. They are probably just trolling or didn't think it though all the way. TouchID is more secure than a short numeric only passcode.
Score: 7 Votes (Like | Disagree)

penajmz
Would love for Chase to do this.
Score: 5 Votes (Like | Disagree)

Rogifan
How about bringing Pay to Target? Is that so difficult?
Score: 4 Votes (Like | Disagree)

gaximus
My bank doesn't have ATMs, they just reimburse all ATM charges. They support Apple Pay, so I wander if it would work at other bank ATMs
Score: 4 Votes (Like | Disagree)

How about bringing Pay to Target? Is that so difficult?

No, it's not difficult. It's just a business decision Target has chosen. Target is still part of the Merchant Consumer Exchange and the push to use the CurrentC app.

IIRC, it's still being tested in Columbus. Most think the whole MCX/Current concept is DOA - from QR codes, to being linked directly to your bank account to data mining/privacy concerns. But as long as Target is a part of that effort, I don't see them embracing Apple Pay.
Score: 2 Votes (Like | Disagree)
Read All Comments

Friday May 7, 2021 6:55 am PDT by Sami Fathi
According to Apple leaker Jon Prosser, Apple's upcoming release of the MacBook Air will feature various colors, similar to the colors in the newly released 24-inch iMac. In the latest video of his YouTube channel Front Page Tech, Prosser says the same source who accurately provided him information on the first Apple silicon iMac coming in colors has told him that he recently saw a prototype...
Read Full Article • 332 comments