Tuesday January 12, 2016 7:17 pm PST by Juli Clover
Amid an overall decline in worldwide PC shipments, Apple is the sole manufacturer that saw positive shipment growth, according to new PC shipping estimates from Gartner. With worldwide PC shipments from Lenovo, HP, Dell, ASUS, and Acer down, Apple also broke into Gartner's list of top 5 worldwide PC vendors for the first time since Q3 2015.

During the fourth quarter of 2015, Apple shipped 5.7 million PCs, for 7.5 percent market share. That's up from 5.5 million PCs and 6.7 percent market share in the year ago quarter, for an overall year-over-year growth of 2.8 percent. Worldwide PC shipments totaled 75.7 million units in Q4 2015, an 8.3 percent decline, with Acer and Lenovo seeing some of the biggest drops.

In the United States, Apple saw more significant growth of 6.5 percent, shipping an estimated 2.2 million PCs in Q4 2015 for 12.8 percent market share. That's up from 2 million PCs and 11.6 percent market share in Q4 2014. When it comes to U.S. PC shipments, Lenovo saw significant growth with 2.1 million shipments, while ASUS maintained status quo with 1.2 million shipments. HP, Dell, and manufacturers in the "Other" group that comprises non top-5 vendors, all saw a decline in shipments. 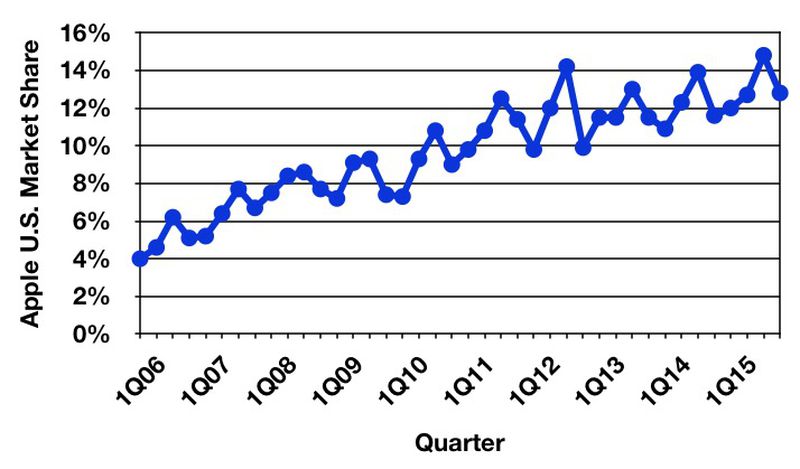 "Holiday sales had a limited impact on PC sales in the U.S. market," Ms. Kitagawa said. "Notebooks were off the top wish list of holiday gifts. Unlike 2014 holiday sales, there were not many holiday mega deals for laptops, especially in value segments. At the same time, consumers' interest shifted to other consumer electronics devices such as TV's and wearables. "

For the full year, Gartner estimates Apple shipped a total of 20.7 million PCs worldwide, ranking the company as the number 5 worldwide PC vendor for 2015. That's up from 19.6 million total in 2014, for a total growth of 5.8 percent and a 7.2 percent share of the market. Lenovo was the market leader in 2015 with 57 million shipments, while HP was second with 52 million and Dell and ASUS were third and fourth with 39 and 21 million shipments, respectively.

For U.S. shipments, IDC estimates Apple shipped 2.2 million machines for a 12.7 percent share of the market. Both Gartner and IDC rank Apple as the number three PC vendor in the United States, below HP and Dell. IDC's shipment estimate for the full year also matches Gartner's, with Apple responsible for 20.7 million shipments and 7.5 percent market share, up from 19.6 million shipments and 6.3 percent market share in 2014.

It's important to note that data from Data from Gartner and IDC is preliminary and the numbers can shift. Last year, for example, Gartner predicted PC shipments of 2.1 million and 11.7 percent market share for Apple in 4Q 2014, later revising that number to 2 million shipments and 11.6 percent market share.

Gartner and IDC both position Apple as the sole top vendor that saw positive worldwide growth in 2015, and the same trend could continue into 2016. Apple is expected to refresh many of its Macs during the year, introducing significant upgrades in the form of Skylake processors for most machines.

appledefenceforce
But Macrumours readers told me that the new Macs suck and no one would want them. :eek:
Rating: 39 Votes

Imagine how mac sales would be in if Tim actually kept up these amazing product cutting edge.


I love my Macs. I have been using them for over 20 years, have have purchased over a dozen for my home.

But, lately, it seems like Macs are becoming Apple's "Red headed step child".

They do not get updates that often, and sometimes the previous model becomes more attractive in the short term. Like in the case of the Mac Mini.

Also, I look at the reducing of the SSD in the fusion drive and wonder why they would do stuff like that.

I love my Macs, and can never picture myself switching to Windows, at least not anytime soon, but I wonder how long Apple will be able to keep these Mac sales up.
Rating: 21 Votes

JimmyHook
At least real people love macs. The trolls in the comment forums make up all kinds of bs about macs being terrible. This is conclusive proof. Apple always wins and other companies consistently fail.
Rating: 19 Votes

Imagine how mac sales would be in if Tim actually kept up these amazing product cutting edge. Macbook air and macbook air need a major refresh.

And for those who give Tim all the credit for amazing sales, Jobs handed him the golden eggs. He just needs to keep the eggs warm.. if he can

I don't have to imagine. I can go to the Apple Store today and see the best computers on the market bar-none.
Rating: 18 Votes

JPSaltzman
As someone who is need of updating his Mac lineup, I find myself stopping every time I go to apple.com and look at what is being offered. The stock computers are (let's admit it) lame, and outdated by at least two-years when compared to what is being offered on PCs. I am talking about Flash Storage prices, RAM prices, Intel chip updates, etc. Apple is at least two years' behind their computers, and yet charging outrageous prices for any sort of upgrade (why are they still offering hard-disk drives at 5400 rpm speed?!?!?!).

So Apple is shooting themselves in the foot. They are making money *(too much money)* on the upgrades they are forcing upon the user. If we want a top-notch machine at top-notch speed and performance, Apple is hitting us with (yes) the Apple Penalty….. 1.5x or 2.x the price. They do it with the Macs, they especially do it with their iOS devices and their meager stock-RAM and storage.

Shame on Apple. They should be the leader in all things -- innovative and in competitive pricing.
Rating: 15 Votes

AustinIllini
People want good laptops. Period. Not hybrids or any of that garbage that turns into a tablet with 2 hour battery life. They want the best experience on the best hardware.
Rating: 14 Votes

Soccertess
Imagine how mac sales would be in if Tim actually kept up these amazing product cutting edge. Macbook air and macbook air need a major refresh.

And for those who give Tim all the credit for amazing sales, Jobs handed him the golden eggs. He just needs to keep the eggs warm.. if he can
Rating: 13 Votes

This is surprising news as almost the entire Mac line appears now obsolete.


Not to the people who buy them. They just take them home, open the box and start using them, instead of sitting around diddling themselves while they drool over specs.
Rating: 9 Votes

PC's put together by people themselves.
PC components purchased to update/improve/upgrade existing machines.
The fact that due to the about a PC can last way longer and still perform up to date far longer than a Mac.

I don't mind surveys but they almost always distort.

If PC's were glued shut and when they got slow you bought a new one, then PC sales might rise.
If Macs could have new CPU's, Graphics Cards, More memory and drives fitted by the user, then more people may hold onto them longer without needing to buy a whole new machine.


This would be valid explanation if we were still in the nineties but not anymore. Here's why:

* The general consumer doesn't put together their PC by themselves anymore. It is clearly visible in the amount of companies specialised in custom building that went into default or bankrupt recently. An example is Atelco in Germany, one of the biggest on the planet in this respect. Another clear indicator is the shelf space that computer components get in big box and more specialised stores. They shrink by the minute. The amount of self built PCs would not make a significant dent into the statistics shown here.
* Those that used to need custom built PCs can now buy good enough BTO machines off the shelf. Even gaming rigs are now more conveniently bought off the shelf or BTO. I know this might not be representative, but the last time I heard anyone talk about building a PC themselves I was still in the previous millennium doing my Ph.D.
* The general consumer buys laptops nowadays and is less and less interested in upgradability. This is not only a "feature" of Apple products but also of others. Look at Samsung, Microsoft etc that now produces devices that are just as much glued shut as the Apple devices. With the decreased demands of specs by the consumers and the increased quality of the hardware, self-upgrading and repairing has become very unappealing and uninteresting.
* The general longer lifespan of Apple devices would offset the perceived problem that they cannot be upgraded. My Father still uses a 2004 MacBook that runs well enough for his purposes (mail, word and internet). My sister's Dell that was purchased somewhere in 2010 is long dead (and she treated it well). Most people that have transitioned from PC to Mac have stories like this.