Lumos Labs, the company behind the Lumosity app that promises to "challenge your brain" using a daily training program of cognitive games, will pay out $2 million to settle deceptive advertising charges brought against it by the United States Federal Trade Commission.

According to the FTC, Lumos Labs deceived consumers by telling them the games in Lumosity would help them perform better at work, get better scores on standardized tests, and stave off the decline of cognitive impairment related to age or disease. It also claimed its games could help with conditions like dementia and Alzheimer's disease, as well as improving cognitive impairment associated with conditions like stroke, traumatic brain injury, PTSD, ADHD, chemotherapy, and more. 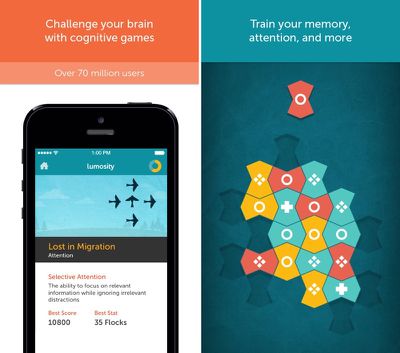 "Lumosity preyed on consumers' fears about age-related cognitive decline, suggesting their games could stave off memory loss, dementia, and even Alzheimer's disease," said Jessica Rich, Director of the FTC's Bureau of Consumer Protection. "But Lumosity simply did not have the science to back up its ads."

Available in the iOS App Store, Lumosity offers a selection of more than 50 cognitive games it claims were developed by scientists and game designers to train the brain. While a basic membership to access a limited number of games is free, a membership costs from $6.70 to $11.95 per month or up to $299.95 for a lifetime pass.

Lumosity TV, Internet, radio, and social media advertisements suggested customers could play the games for 10 to 15 minutes three or four times per week to achieve "full potential in every aspect of life," and falsely claimed its health related benefits were backed by scientific studies.

Lumos Labs is facing a $50 million judgement, but the FTC has agreed to suspend the full amount due to Lumos Labs' financial position. Instead, the company will pay $2 million and will agree not to make future health and performance claims without "competent and reliable scientific evidence." Lumos Labs is also ordered to notify subscribers about the FTC action and provide them with a way to cancel their subscriptions.

Lumosity is just one of many "brain training" apps available in the App Store. Elevate, another highly popular brain training app that's been highlighted by Apple, claims its app will help improve "critical cognitive skills" to "boost productivity," but it shies away from making the deceptive health-related claims that got Lumosity in hot water.

Preyed on fears? How stupid are people?

BMcCoy
It's a controversial area, and a difficult one to scientifically study.. with confounders of placebo effect and confirmation bias.
There are studies suggesting these apps are beneficial in certain circumstances, but even those studies have been subject to critical analysis.
Certainly it is too early to make big claims, especially about preventing disease like dementia.
Score: 4 Votes (Like | Disagree)

I KNEW it was a phony! It's a BIG FAT PHONY! I want my compensation!

Then why did you buy it if you knew it was fake?
Score: 2 Votes (Like | Disagree)

Kaibelf
Preyed on fears? How stupid are people?
Score: 1 Votes (Like | Disagree)

neuropsychguy
I'm going to offer my professional opinion on this (my job is related to this area).

People would ask me if I recommended Lumosity as a way to remain mentally active. My answer was always - "if you don't mind paying and enjoy it, then go ahead, it's not going to hurt. It probably doesn't do much but it's better than doing nothing (unless the money you spend could be going towards something better)."

What can you do to get similar or better mental results? Read, take a class, exercise (being physically active is just as [or more] important than mental fitness), play games, travel, be socially involved (friends, work, church, volunteering), take up a hobby, etc. Most of these are a lot less expensive and most will give better results.

Will Lumosity stave off dementia? Worst case - no. Best case - no, but it might delay its onset for a handful of months (but you can get better results from exercising regularly and otherwise being mentally active). This, however, is not supported by any research; I'm just giving it the benefit of the doubt.

This lawsuit is completely warranted but if you enjoy Lumosity and think it's doing something beneficial then keep at it; just know that it's probably not going to make your cognitive abilities better.
Score: 1 Votes (Like | Disagree)

windywalks
The sole price of the app's subscription is enough to deter me - I just don't think it's worth it.
The fact, that it made laughable claims about it's efficaciousness just proves me right for not even trying it.

Games definitely stimulate your brain in areas you don't necessarily use in day-to-day life, but giving people the false hope, that playing them will unlock abilities they don't necessarily poses in the first place is just wrong.
I remember playing a Wii game at my friends place, that said you only use 10% of your brain. It all sounded like hogwash even without studies.

You might as well spend those 300 bucks on a relaxing weekend trip, it will definitely help you're productivity.
Score: 1 Votes (Like | Disagree)
Read All Comments