Ahead of this week's Consumer Electronics Show in Las Vegas, Samsung has announced its latest external solid state drive, the SSD T3. An evolution of the SSD T1, the Portable SSD T3 is Samsung's first SSD to include a USB 3.1 Type-C port instead of a standard USB B port.

Devices that use USB Type-C are proving popular at this year's CES, with multiple companies introducing new USB-C docks, connectors, and more. All of these products, including Samsung's SSD, are compatible with the 12-inch Retina MacBook, Apple's first computer to take advantage of USB-Type C.


Samsung's Portable SSD T3 features a body that's encased in silver and gray aluminum, an upgrade from the plastic body of the SSD T1. Internally, the SSD T3 features the same controllers with SSD TurboWrite technology and Vertical NAND flash used in each of Samsung's 2.5-inch SATA solid state drives.

The SSD T3 offers sequential read and write speeds of up to 450MB/s, and it's also lighter and more durable than most standard hard drives on the market. According to Samsung, it's smaller than an average business card. It can survive up to 1500G of force and will remain functional even after a drop of up to two meters. 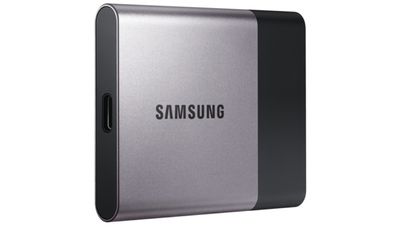 Samsung has not unveiled pricing on the new SSD, which is expected to start shipping out in February of 2016.

robeddie
With the limited amounts of internal SSD storage Apple will put in their computers (and then zero internal upgrade ability after purchase), solutions like this will become increasingly necessary unfortunately.
Score: 7 Votes (Like | Disagree)

macintologist
Yea but when you plug this into the Macbook it will drain the battery even faster because you it only has one port. When you want to charge you have to unplug the drive.
Score: 5 Votes (Like | Disagree)

KPOM
Looks good. I may buy one as a backup drive. I like seeing all the USB-C peripherals being introduced this week.
Score: 3 Votes (Like | Disagree)

That's why they make these. :)
http://www.amazon.com/IVSO-2-Ports-Adapter-Charging-MacBook/dp/B00YL3FEQW

I'd pay $100 to have had extra ports built in the machine in the first place. Small is nice but if I have carry a bunch of adaptors to make things work it's not so nice.

FYI, that adaptor doesn't help with the mentioned Samsung drive and the power problem that you're responding to, there is still only one USB-C port available, you still have the charging issue. I guess you could try to use the USB 3 adaptor (speed impact?), but now you've got another connector to carry and I don't know that adaptor will support the SSD drive via USB (it says mouse and flash only).