Hyundai Launching CarPlay in Sonata in First Quarter of 2016 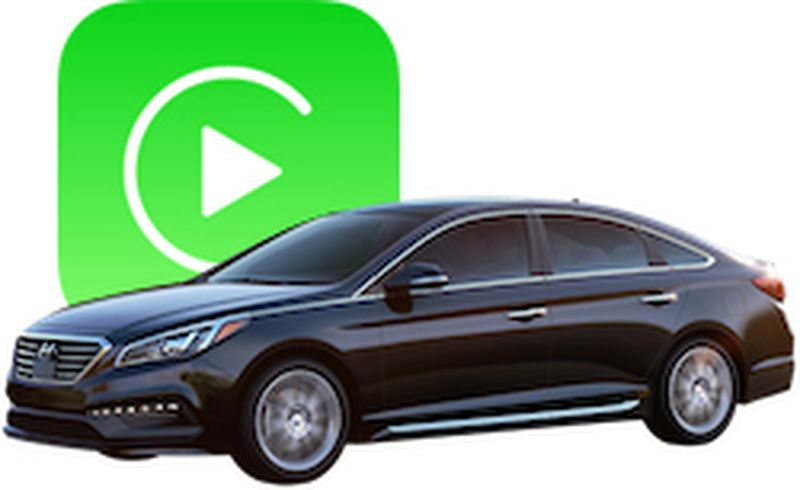 Hyundai has confirmed that CarPlay will launch in the 2016 Sonata in the first quarter of next year, per the Detroit Free Press. The carmaker will reportedly sell an SD card with new software to get the system for an undisclosed price.

The report does not specify if CarPlay will be available in 2016 Sonata models sold outside of the United States, or if Apple's in-dash software will be backwards compatible with the 2015 Sonata. The carmaker has not yet outlined plans to bring CarPlay to the rest of its vehicle lineup.

In April 2014, Hyundai announced that CarPlay would be available in the Sonata beginning in the 2015 model year, but it failed to deliver on that promise. CarPlay is only now beginning to experience wider U.S. adoption in 2016 vehicles from General Motors, Volkswagen, Honda and other automakers, as either a standard feature or entertainment package upgrade.

CarPlay provides hands-free or eyes-free access to Maps, Phone, Messages, Music, Podcasts and third-party apps including Spotify, Rdio, iHeartRadio, CBS Radio and MLB At Bat. The platform uses Siri and interfaces with your vehicle's knobs, dials and buttons for safer access to common iPhone features. The software is compatible with iPhone 5 or later running iOS 8 or above.

Even with a cheap car like a Hyundai that's good to see they are being implemented with CarPlay rather than upscale quality cars only.

Cheap? The Hyundai Equus starts at $61,500 USD, and the Sonata starts over $20k and goes up considerably after that. It's inexpensive for the amount of car and features you get compared to German automakers, but these aren't cheap, budget vehicles. If you mean

Cheap? The Hyundai Equus starts at $61,500 USD, and the Sonata starts over $20k and goes up considerably after that. It's inexpensive for the amount of car and features you get compared to German automakers, but these aren't cheap, budget vehicles. If you mean

I think Henry meant cheap as in inexpensive. To that end, Hyundai does sell 4 vehicles from $15K-$18K. That's cheap. Using the Equus as a retort is sort of like using a Toureg as an example of VW not selling cheap cars when the Jetta is right there.

Even with a cheap car like a Hyundai that's good to see they are being implemented with CarPlay rather than upscale quality cars only.

Agreed. Offering it throughout model and manufacturer lineups increases the chances of adoption.
Score: 4 Votes (Like | Disagree)

I think Henry meant cheap as in inexpensive. To that end, Hyundai does sell 4 vehicles from $15K-$18K. That's cheap. Using the Equus as a retort is sort of like using a Toureg as an example of VW not selling cheap cars when the Jetta is right there.

For their class, they are inexpensive, but Hyundai the brand, which is how he framed it, isn't some inexpensive brand. I also noted the Sonata. If that's Henry's measure, then all major automotive makers have inexpensive cars.
Score: 4 Votes (Like | Disagree)

Even a conversation with someone in the car reduces your reaction time. If one pays attention, they will notice that they will look at the front seat passenger in which the are talking to from time to time. With hands-free there is nothing but the road and instrument panel that needs to be looked at it, so one could argue that talking to someone in a car is potentially slightly more dangerous.

But even those that take personal precautions, also need to be aware of how others might reaction around them. I can't wait until autonomous driving removes a most of the major accidents on the road.

One advantage of having the conversation in the car versus over the phone is that you have another set of eyes on the road and the other person in the conversation can tell when it is a good time to stop talking so the driver can complete a more demanding maneuver.
Score: 3 Votes (Like | Disagree)

I've tested several vehicles and aftermarket infotainment head units with varying results. A couple of the earlier ones were just so slow respond that even as an iOS user I would have rather used their default system and control my iPhone the old fashion way.

I've never tried testing via the wireless option, but except for very short drives where taking your iPhone out of your pocket to charge whilst driving is too much of an inconvenience, I don't see that getting often, which makes it a back-burner concern.

PS: Are there any automobiles that are yet using capacitance, IPS panels on their head units?

The Volvo XC90 has a capacitive and infrared panel, the infrared allows the screen to work with gloves on.
Score: 3 Votes (Like | Disagree)

As shown, they have a wide range of prices and vehicles, like most other major car manufacturers, despite your opinion that they only sell "affordable" cars.

Regardless of the "wide range of prices" Hyundai offers, what I stated was fact and not an opinion. Hyundai is generally known as an affordable car from a Korean manufacturer and they are not plastered in people's heads as being in the same league as most other high-end cars. And please learn to read posts because I never said, "Hyundai ONLY SELLS affordable cars".
Score: 2 Votes (Like | Disagree)
Read All Comments

Tuesday March 31, 2020 10:22 am PDT by Juli Clover
Apple has acquired weather app Dark Sky, Dark Sky's developers announced today. Dark Sky is one of the most popular weather apps on the App Store, known for its accuracy and storm warnings. Our goal has always been to provide the world with the best weather information possible, to help as many people as we can stay dry and safe, and to do so in a way that respects your privacy. There is no ...
Read Full Article • 188 comments