Apple devices accounted for just under half of new mobile device activations during the holiday season, according to a new report released today by mobile analytics firm Flurry. 49.1 percent of all new devices activated were Apple devices, and while that number is slightly down from last year's 51.3 percent, Apple still dominated all other mobile device companies. 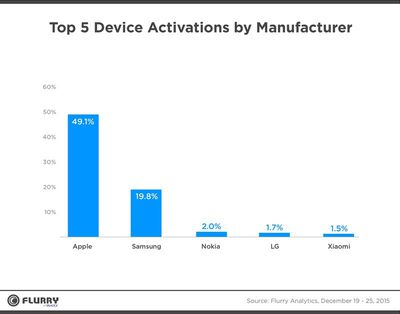 Larger-screened "phablets" like Apple's 5.5-inch iPhone 6s Plus were especially popular during the 2015 holiday season compared to prior years, representing 27 percent of new device activations. That's up from 4 percent in 2013 and 13 percent in 2014. Full-sized tablets have gone down in popularity, making up only 9 percent of new device activations in 2015.

Medium-sized iPhones like the 4.7-inch iPhone 6 were still the most popular Apple devices over the holiday period at 65 percent, followed by full-sized tablets, phablets, and smaller tablets like the iPad mini. Comparatively, only 35 percent of Android devices activated were medium-sized smartphones, while 50 percent were phablets.

Apple's phablet was introduced in September 2014, and in less than a year and a half has commanded 12% share of all Apple devices activated during Christmas week. This appears to be coming at the expense of medium phones and small tablets as more users opt for the size in between the iPhone and iPad Mini. You'll note we did not break out a "Large Tablet" category for the new iPad Pro. These are grouped into "Full-Size Tablets" and represented less than 1% of device activations.

As for app downloads, Christmas day saw customers downloading 2.2x as many apps as the average day in December across multiple platforms including the Apple App Store and Android's Google Play.

To gather its data, Flurry measured smart device activations and app downloads from the more than 780,000 apps it tracks. Data was collected from December 19 to December 25.

GhostRaider
I admit I was one of them. Got myself an iPhone 6s Plus 64GB and abandoned Android.

Honestly the 6s Plus is a great phone. Once you have used big screened phones, you just cannot go back to a smaller one. Everything looks crammed on a smaller iPhone 6s and on the 6s plus there is a whole lot of room.
Score: 14 Votes (Like | Disagree)

"Larger screened "phablets" like Apple's 5.5-inch iPhone 6s Plus were especially popular during the 2015 holiday"...

I think what many of us would like is a small 5s-sized iPhone that can expand the display to 5" or 6" when necessary (like you sometimes see in science-fiction movies).

Or like the folding phone that Samsung keeps predicting each year that they'll put into limited production.

(I'll be first in line when they finally do!)

jayducharme
The poor sales of smaller smartphones is probably the result of a lack of stock. Few companies make them anymore. And people looking to buy an iPhone probably wouldn't want a 5s that has less storage, memory and a slower processor than Apple's other offerings. The 5c had the same issues. If Apple sold a 4" iPhone that equaled their other offerings except in display size, then we'd be able to accurately judge whether people really want that form factor.
Score: 6 Votes (Like | Disagree)

I admit I was one of them. Got myself an iPhone 6s Plus 64GB and abandoned Android.

Honestly the 6s Plus is a great phone. Once you have used big screened phones, you just cannot go back to a smaller one. Everything looks crammed on a smaller iPhone 6s and on the 6s plus there is a whole lot of room.

Well i've been using a 4.7" iPhone 6/6s since the day the 6 came out and I yearn to go back to a 4" iPhone 5s sized phone still - so you can't blanked statement everyone with that theory i'm afraid.
Score: 6 Votes (Like | Disagree)
Read All Comments